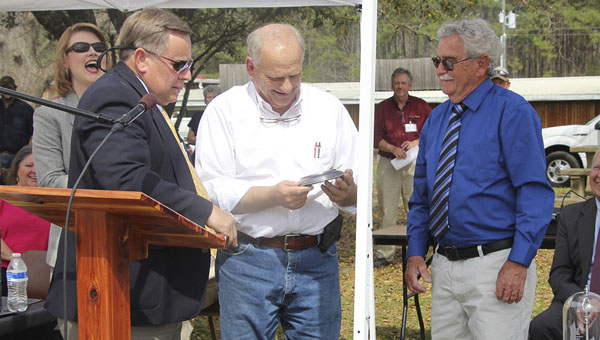 By Robert Blankenship
The Demopolis Times

Local and state officials joined with the town of Thomaston to celebrate the official grand opening of Dave’s Market Wednesday.

The opening of the grocery store will offer residents of the community a place to shop locally and will eliminate the town being marked as a “food desert” by the United Stated Department of Agriculture. The USDA defines a food desert as any community that is at least 10 miles from fresh fruits and vegetables for purchase.

The effort to bring a grocery store to Thomaston has been years in the making for town and Marengo County officials. Last year, Dave Oliver, owner of Dave’s Market in Valley Grande, announced plans to renovate the old Marengo County High School gymnasium into a grocery store. After seven months of construction, the ribbon cutting was held in February as part of a soft opening for the store.

Wednesday’s event brought representatives from state and federal agencies that helped make the grocery store a reality through grants and other services. In addition to the $1 million invested by Oliver, other funding was made available through grants from the USDA-Rural Development, ADECA, Alabama Tombigbee Regional Commission and the Department of Rural Development. The Marengo County Commission and Engineer also assisted the town by assisting with work on the property.

“When we were discussing this project we knew right away we would need help,” said Thomaston Mayor Jeff Laduron. “It was unreal to see so many people excited to help Thomaston get a grocery store.”

Prior to the beginning of the project, the old gymnasium that is now a grocery store had no roof and was described as a “jungle” inside due to the growth of trees and other vegetation. Laduron admitted that at one point in the city’s recent past, the building was “on our radar to be torn down.”

“When we first came down here there were trees growing out of the roof,” Oliver said. “I told Jerry Atchison, the project manager, what we wanted and he got it done.”

Thomaston Industrial Development Board Chairman Malcolm Sanders is also amazed at the difference in the structure.

“When you look at the store you can’t help but reflect back on what it looked like before. But with the cooperation of many, many people it has been transformed into a beautiful building and supermarket,” Sanders said.

USDA Rural Development State Director Ronnie Davis said his agency is happy to have played a role in eliminating Thomaston from the list of food deserts.

“Projects like this takes local people who have heart in the things they are doing to develop projects that work for their community. It takes a village to make a project work and we were proud to do our part,” Davis said.

ADECA State Director Jim Byard spoke on the uniqueness of the store and what it means to Thomaston.