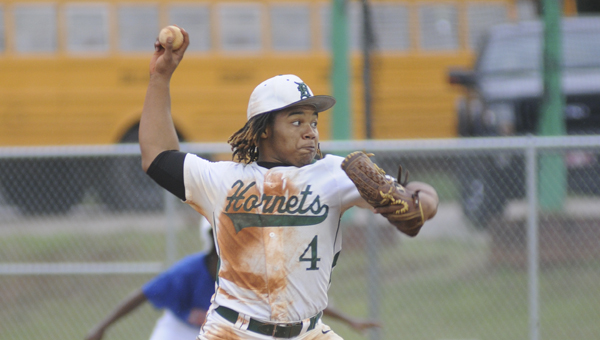 Dallas County’s Delando Atchison throws a pitch in a game against Wilcox Central Friday at home. The Hornets beat the Jaguars and the bad weather to win 20-1.–Justin Fedich

PLANTERSVILLE — Not even a strike of lightning and pouring rain could stop the Dallas County Hornets from storming past the Wilcox Central Jaguars.

The Dallas County baseball team (8-5) defeated Wilcox Central 20-1 Friday at home in a game that was delayed due to thunderstorms. The Hornets led 6-1 when the game was stopped temporarily in the second inning, and once the game started up again roughly 30 minutes later, Dallas County picked up right where it left off.

“We’ve got to learn to adjust, and we did that today. We sat back on it and made some solid hits,” said Dallas County head coach Cody Massey.

The Hornets were scheduled to play a doubleheader with the Jaguars, but they ended up only playing one game due to the inclement weather.

Atchison held Wilcox Central from scoring in the second inning and the Hornets added two more runs in the bottom of the inning before lightning caused the game to come to a standstill.

When the game resumed, Dallas County had the bases loaded and no outs. A wild pitch sent Andre Smith home to increase the Hornets lead to 7-1. A pair of Wilcox Central balks scored both Jones and Derrion Atchison. Joshua Haskell had a RBI to send home David Robertson, and Dallas County took a 10-1 lead into the third inning.

Delando struck out three consecutive batters to put away the Jaguars in the top of the third inning.

Smith knocked a triple down the left field line early in the bottom of the fourth inning. Haskell sent him home with a grounder that rolled past the wet grass infield and into the outfield. When Haskell scored, the Hornets increased their lead to 15-0.

Atchison only allowed one Wilcox Central player to reach base in the top of the fourth inning before retiring the rest of the next three batters.

Atchison and Smith each opened the bottom of the fourth inning with singles. Robertson smashed a single to bring Smith and Denson home and make it 18-1. Haskell was hit by a pitch, and he added one of Dallas County’s final runs to give the Hornets 20 runs in an easy home win. Massey said he hopes the confidence his team had during Friday’s game carries over to some of the more challenging opponents Dallas County will face as the season moves forward.

Weather played a role in the Dallas County softball game as well. The Hornets and Jaguars were scheduled to play two games, but finished only one and part of another.

Dallas County (13-1) won the first half of a doubleheader 15-0 Friday at home against Wilcox Central. In the second game, the Hornets led 3-0 before the game was called due to bad weather.

“I feel like we hit the ball well. We ran the bases well, so I was really pleased,” said head coach Willie Moore.

Calandra Morrow hit a single to start off a huge first inning for the Hornets in game one. Keyondra Fletcher followed with a triple to send Morrow home for the first run. Shaniya England, Yasmeen Green, Brittney Brown, Morgan Krumnow and Alexis Walker each scored along with Fletcher in the first inning to give the Hornets a 7-0 lead over the Jaguars at the end of the first inning.

After a scoreless second inning, Fletcher, England and Green added runs in the third inning to give the Hornets a 10-0 lead. In the fifth inning, Dallas County closed out the game with five more runs to win by a 15-point margin.

Tori Hatfield was the winning pitcher.

In the second game, Lindsey McIlwain, Morrow and Fletcher each scored to lead 3-0 before the game was called early.

Both Moore and Massey were proud of their teams for playing well in wins against Wilcox Central Friday, but both know the most challenging task is still ahead with region opponent Demopolis.

“Demopolis won it last year. They’re the team to beat,” Moore said. “I’m just hoping we can get better so that we can give ourselves a chance to go over there and compete with them.”