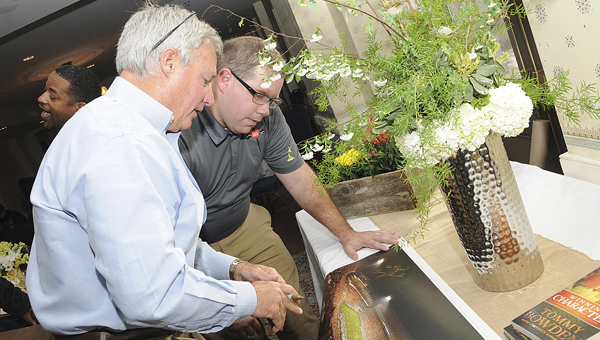 The breakfast was hosted by All in Sports Outreach, a local nonprofit that uses sports to share the Gospel with children, youth and adults in the Selma area. Bowden, who coached at both Alabama and Auburn and served as Clemson’s head coach from 1999-2008, shared not only past experiences on the gridiron, but also spoke strongly about his faith.

During his time at Clemson, Bowden was involved in one of the most unique rivalries in college football. In what was dubbed as the Bowden Bowl, Tommy’s Tigers squared off against his father Bobby Bowden’s Florida State Seminoles nine times when both coaches were in the ACC.

“He won the first four. I remember the AD called me and said ‘listen we hired you to beat Florida State, if you can’t beat your father we aren’t going to keep you around.’ After that, they got my attention,” Bowden said. “I won the next four out of five, so then they called him in and said ‘hey, we hired you to beat your son. If you can’t beat him, we’ll get rid of you.’ So, they fired us both.”

He also joked about the challenges of recruiting against his dad, who trails only Joe Paterno in wins in the NCAA’s Division I Football Bowl Subdivision.

Tommy didn’t win like his dad on the football field, but he had a successful career too.  He compiled a 90-49 career coaching record, including a 12-0 record in 1998 with Tulane. Tommy said as a head coach he tried to teach his players five character traits — commitment, accountability, responsibility, discipline and sacrifice.

“[My success] wasn’t because of me,” Bowden said. “I think it was the fact that I taught those players and tried to get them to understand those five things.”

When Bowden stepped down, Swinney was named interim head coach and was hired as the full-time head coach shortly after.

Bowden also spent time Friday speaking about faith and why America needs to get back to its Christian roots.

“A lot of our officials are afraid to say we are a Christian nation,” Bowden said. “That’s our history. That’s our background.”

Now that he’s not coaching, Bowden said he spends a lot of time speaking around the country.

He also serves as an analyst for the ACC Network during football season.

All in Sports Outreach started in 2015 with a basketball camp but the organization has since hosted several softball and baseball camps and had a coat drive before Christmas. Stewart Hardy, one of the board members for All in Sports, said the group is planning a basketball and football camp in late June.

For more information, visit the group’s Facebook page titled All in Sports Outreach.