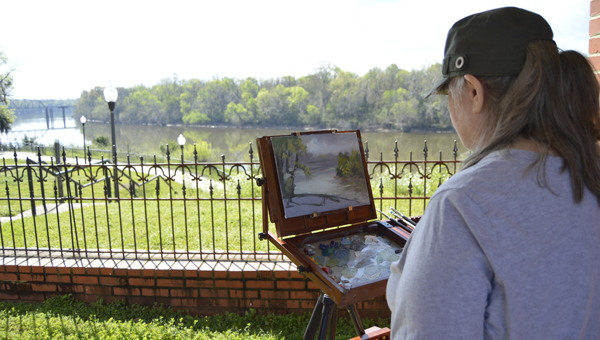 Artist Toska Courbron paints a scene of the Alabama River on Friday. Courbron and other artists were in Selma on Friday to paint local landscapes and buildings as part of the Selma Art Guild’s Wet Paint Sale.

Using a makeshift easel, consisting of a camera tripod and paperboard, Gail Cosby worked frantically to paint a scene of Sturdivant Hall before the light changed.

“If you make a mistake, it’s down. You can’t fix it,” Cosby said as she dipped her brush into the watercolor palette. “You learn to be forgiving.”

Cosby is from Birmingham and has been apart of APAA for little over a year but is familiar with painting from studying art in college. Now retired, she can spend more time doing what she enjoys.

Cosby started with oils and acrylic, but has been using watercolor for the past three years. She said she paints with watercolor because of the ease of transporting supplies but also enjoys the effects water provides.

“I like the way water splashes and drips,” Cosby said.

Stationed on Dallas Avenue, Susan Johnsey decided to use more traditional oils for her paintings.

“I still use the traditional oils, so that’s why I have to have turpentine or mineral spirits,” she said, pointing to the cups next to her canvas.

Johnsey lived in Selma for nearly 17 years before moving to Birmingham in 1996. She has been a math teacher for over 30 years and picked up painting 10 years ago for a creative challenge.

“I’m a math teacher and I was wanting to do something with the other side of my brain,” She said. “I thought I wasn’t going to have to use math, but you do.”

Johnsey said one of the biggest challenges of using oils is how slow it dries. She said the painting she began early Friday morning will still be wet Saturday. Because of the slow drying time, Johnsey said it’s important to know how to mix and layer colors so they don’t become muddy when dealing with a short working period.

“Plein air is a little different from normal. You’re under a little bit more pressure,” she said.

Plein air painting became popular in the mid 19th century when supplies became more portable such as paint being available in tubes. The term is borrowed from “en plein air,” meaning “in the open air,” in French. Since painters are working with what’s in front of them, they face many challenges such as changing weather and light.

“I’ve heard from workshop instructors that painting outside makes you a much better painter in the studio,” said Tuscaloosa painter Jack Kidd. “This is just like an outside study. If they wanted to go to a bigger one then they have the colors and values.”

Kidd started painting about three years ago when he took his first painting workshop with the APAA. He said this is his second time painting in Selma with the group.

“It’s a great place. All the buildings and bridges, just a lot of different scenes,” he said.

Kidd was set up near the River Front Park painting a scene of the backs of buildings using water-soluble oil paint.

“We really appreciate the opportunity to come out here and do this,” he said.