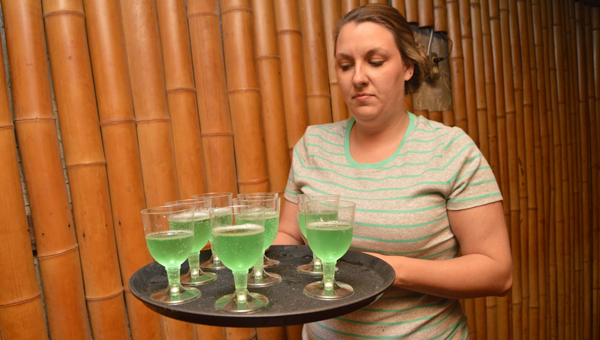 The Queen City celebrated St. Patrick’s Day with good food and drinks for a good cause.

“Everything is donated so it’s going to be a complete profit for the museum,” Spivey said as she separated tickets for a customer.

For 35 years the Tally Ho has been hosting a benefit dinner for a local charity or agency. This year they chose the Old Depot Museum.

“We’re going to make a lot of money for the Old Depot Museum, and we’re just excited and hope everybody has a good time,” she said.

Green beer and specialty dishes such as fish and chips, and Guinness glazed steak burger with garlic fries were available for the night. Complimentary green Champagne was distributed shortly after 6 p.m.

Micah Bailey is a regular of the restaurant. He thinks the green drinks are a festive touch.

In addition to the specialty menu items, a photo booth with St. Patrick’s Day props was set up at the front entrance. Green beads and other small accessories were given to guests as they entered. 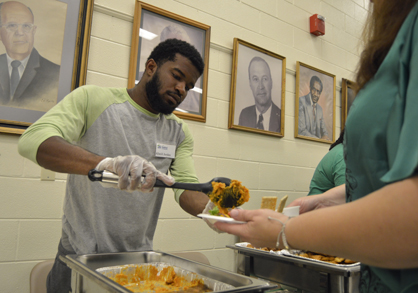 Habitat for Humanity also had success. Nearly 200 supporters were in attendance for the annual Food Fest and Auction at the Carl C. Morgan Convention Center.

“Every dime that is bid here tonight goes to Habitat for Humanity,” said auctioneer Bill Gamble to the audience.

Items ranged from TVs to microwaves and wines to plants were lined up against the wall on the stage. The money is used to build or renovate homes for families in need.

Cindy Motley of Tucker Family Dentistry said she has attended the auction for nearly five years. She said the reason she comes back is because of the cause.

“I would love to help me if I needed it and it’s just a nice way of helping someone that can’t help themselves,” she said.

Habitat for Humanity executive director Nina Capps said the goal was to raise $12,000. She said $10,000 had already been collected through sponsorships, tickets and table sales. The auction had nine sponsors, the most it has ever had according to Capps.

Local restaurants contributed to the event by donating various dishes including burgers, mac and cheese, wings, pizza, gumbo, barbeque, salad and others. Capps described it as “A Taste of Selma.”

“It was a very nice turnout,” Capps said. “It looks like everyone is having a fun time.”