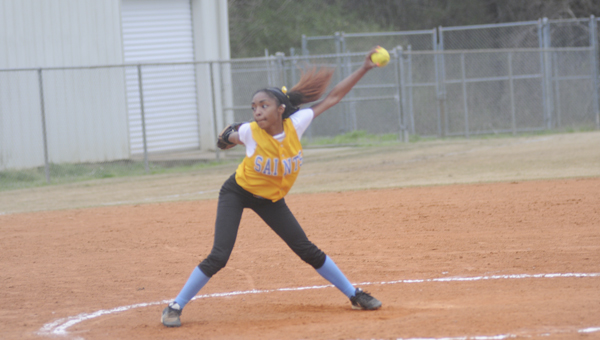 Selma pitcher Dajah Thrash tosses a pitch during a game Thursday against Southside at the Sportsplex. Thrash only allowed one run, as the Saints easily beat Southside 20-1. — Justin Fedich

The game was out of hand before Southside stepped up for its first at-bat.

The Selma Saints (4-2) used a 10-run first inning to defeat the Southside Panthers (2-2) 20-1 Thursday at the Sportsplex. In a game that only lasted three innings, the outcome for the Saints was never in doubt.

“Everybody did an excellent job,” said Selma head coach Jameria Johnson. “Our pitcher had defense to back her up.”

Alaysha Manuel and Charmekia Moore each singled in the first two at-bats of the game. Manuel crossed home plate just minutes into the game, and the rest of her teammates weren’t far behind. Mariah Davis, Alisha Thomas, Kayla Paige and Kanesha McGraw each scored to give Selma a 7-0 lead. Denetra Whitlock hit a two-run RBI, and she made it to home plate in the inning as well.

Dajah Thrash, who led the Saints at the mound through all three innings, was the last Saint to score in the first inning. The Panthers trailed 10-0 at the start of the bottom of the first inning.

Jekeria Harrison led off Southside with a single, and Antonyah Dudley hit an RBI a few batters later to send Harrison home for the Panthers only run of the game.

In the top of the second inning, Whitlock added another RBI when she drove in McGraw. Moore hit a shot deep to center field, as she ran all the bases to bring herself and two others home.

Davis followed Moore’s in-the-park home run with one of her own, as she was assisted by a couple Southside errors.

“We’ve got to be aggressive,” said Southside head coach Idette Clay. “One or two people being aggressive is not enough.”

In the bottom of the second inning, Thrash walked Kamara Baynes and Roshanda Woods, but she struck out three batters to make it a scoreless inning for Southside.

Selma added five more runs in the third inning. McGraw made it to first base after running on a third strike. She quickly made it home after errors allowed her to advance multiple bases.

Whitlock scored after a pitch got past the catcher.

Moore hit an RBI to send Thrash home, and Davis finished off the huge scoring day with a triple that brought Moore to home plate.

“We have to have it in our hearts and want it and stay focused,” Johnson said. “That’s the number one thing is staying focused. Overall, I was proud of them because they did come out here and did what they needed to do.”

Clay said there were multiple players on her team who weren’t able to make Thursday’s game because of prior commitments. She is hoping to work those schedule conflicts out so she can have a more experienced team moving forward.

“Until we can get those issues solved, it’s going to take a lot of work on their part,” Clay said.