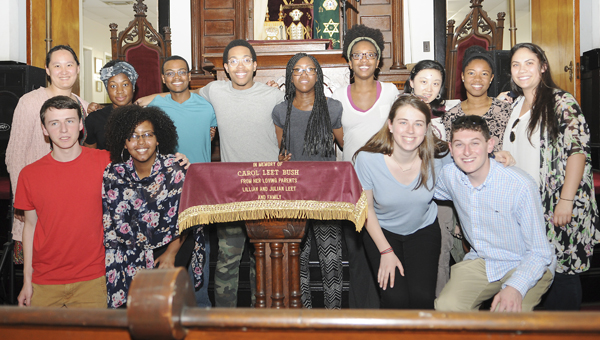 Students from Duke University visited Selma Tuesday. One of their stops was at Temple Mishkan Israel, where they learned about the Jewish history in Selma.

Temple Mishkan Israel on Broad Street doesn’t hold regular services anymore, but it’s going to be busy over the next couple weeks.

On Tuesday, the only Jewish temple in Selma hosted 20 students from Duke University as part a spring break trip for Jewish and African American students at Duke.

Not all the students who visited the temple on Tuesday were Jewish, but the students still said their trip to Temple Mishkan Israel taught them lessons they could take back to campus. Chandra Guinn, director of the Mary Lou Williams Center for Black Culture at Duke, said she appreciated the stories that were told at the temple.

“For many of our students who are non-Jewish students, it’s an opportunity to see a more traditional temple and to have the opportunity to hear the story,” Guinn said. “The personal story of the people who survived and who managed to find a way to hold onto themselves and their community and their identity and to thrive.”

Duke sophomores Kyra Josephson and Hildana Haileyesus each said they loved being in a building with that much history behind it.

“I thought it was really cool to see one with all the stained glass and all the original architecture,” Josephson said.

On Wednesday, Leet welcomed around 55 students and adults from Hyman Brand Hebrew Academy from Overland Park, Kansas. Leet said it would be a new experience bringing in a large group of people who keep kosher, which means they abide by religious regulations that restrict what they can and cannot eat.

This coming Monday, a teen group will travel all the way from Westchester, New York to visit the temple. On Friday, March 26 and Saturday, 27, the temple will enjoy a rare opportunity to host a family for a bar mitzvah.

“It’s always interesting for us, for Selma Jews to be able to show off our beautiful 116-year-old synagogue,” Leet said.

Leet said he wants to educate his visitors, as well as anyone in Selma who is curious, of the history of Judaism in Selma. According to Leet, the city used to have many Jewish retail merchants and other businesses.

He said those stories are often overshadowed by stories about the civil rights movement in Selma.

“We really like to talk about Jewish history and our temple and make people aware that there’s another side of Selma that people don’t know about,” Leet said.

Leet said he hopes to continue to have visitors from both outside Selma and in his hometown in the near future. He is working toward keeping a building with so much history in good shape so that people can continue to tell the stories he has told in the more than 100-year-old temple for generations to come.

“It’s just important to me that the history is told and that people know what Selma used to be like as far as the Jewish legacy,” Leet said.