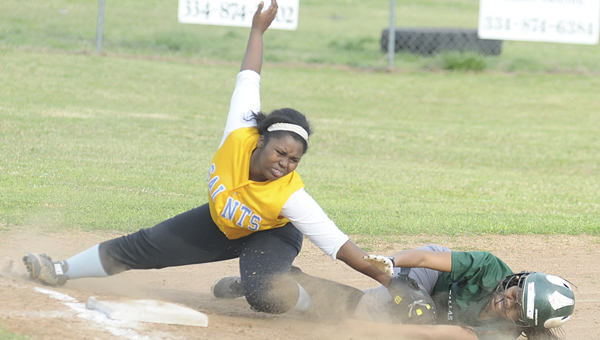 Selma’s Denetra Whitlock tags Dallas County’s Calandra Morrow during Wednesday’s game at Dallas County High School. Morrow was out on the play and was a little shaken up after the hard slide into the bag. The Hornets won the game 13-3 in five innings. — Daniel Evans

Lindsey McIlwain had three RBIs and Tori Hatfield pitched five innings for the Hornets. After a shaky start, Hatfield recovered to throw nine strikeouts and kept the Saints off balance throughout the game. Selma (3-2) managed only two hits in the entire game and both came in the third inning. Despite the win, Dallas County head coach Willie Moore wasn’t happy with how his team played.

“For the last few games, we haven’t been playing as well as we did early on,” Moore said. “We’re not playing good offense, the defense has been suspect and we have not played real smart softball here lately.”

The Hornets found themselves in an early 2-0 hole on Wednesday, but regained the lead quickly.

A single by Keyondra Fletcher scored both Calandra Morrow and McIlwain to tie the game 2-2.

A single by Shaniya England brought in Fletcher to put the Hornets up a run. After singles by Yasmeen Green and Brittney Brown loaded the bases, Morgan Krumnow’s single scored England.

The Hornets could’ve added more, but left runners on base when Morrow and Fletcher flew out and grounded out to end the inning.

“We are swinging at pitches that are not strikes,” Moore said.

“We aren’t being patient in the box. We are not running the bases very smart.”

Selma added a run in the third inning when Mariah Davis and Alisha Thomas hit back-to-back singles. Thomas’ single scored Davis, bringing the Saints within 7-3. The inning ended when pinch runner Erin Strong was thrown out trying to steal third base.

“We were timid and we weren’t hitting the ball,” said Selma coach Jameriah Johnson. “I think we have the team, but they weren’t confident.”

McIlwain hit a double off the center field wall in the third inning to score Purifoy and Jakiera Peterson. Morrow followed with a double that scored McIlwain to put the Hornets up 10-3.

In the bottom of the fourth inning, a single by Purifoy scored Alexis Walker and extended Dallas County’s advantage to eight. In the fifth and final inning, McIlwain’s sacrifice bunt scored Peterson. Morrow was thrown out at home on a double by Fletcher, but Fletcher scored on the next play when a throw to third base was overthrown.

Fletcher scored from there, extending the lead to ten and putting the 10-run mercy rule into affect.

Dallas County plays at Wilcox Central on Thursday. The Hornets only loss of the season came to Maplesville last week. Selma plays Southside Thursday at the Dallas County Sportsplex.