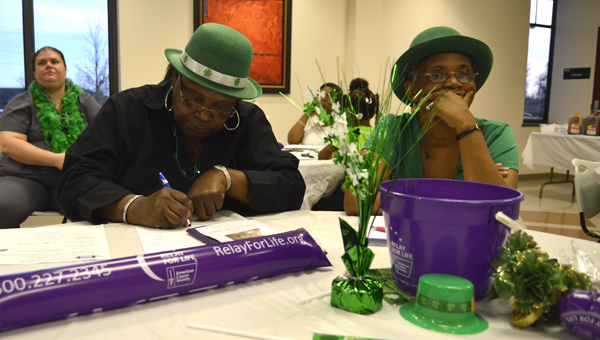 “The rallies are to keep them fired up and to not get discouraged with their fundraising,” said American Cancer Society (ACS) senior community manager Bridget Mills.

She said the rallies also serve as a chance to give advice, hand out materials and get everyone on the same page. This year’s Relay For Life will be April 22. The theme is “Paint the World Purple.”

Of the 40 teams that participate in Relay, about 15 had representatives at Tuesday’s rally at Wallace Community College Selma.

Collectively, the county’s goal is to raise $100,000 for the American Cancer Society. So far, only about $15,000 has been turned in. Mills said this isn’t unusual because the teams are competitive and like to keep their earnings secret until Bank Night, the event where every team turns in its collections to see who has collected the most and to get an overall total.

“You can tell the money’s there,” Mills said.

Last year Lighthouse Jewels raised the most at $10,000. Vaughan Regional Medical Center’s team came in second with just over $9,000.

Adrian Moppins, sponsorship captain, wrote letters that were then sent to various churches and businesses asking for their sponsorship.

A survivor’s banquet will be held on April 11 at the Carl C. Morgan Convention Center at 6 p.m. Mills said all Dallas County cancer survivors and a guest are invited.

Mills said the teams will have one more rally on April 19 before Bank Night on April 21. Afterward, Relay for Life will be held on April 22 at the Selma Lions Club.

Mills said during the relay, awards will be given to top onsite fundraising team, top family team, top business team and others.