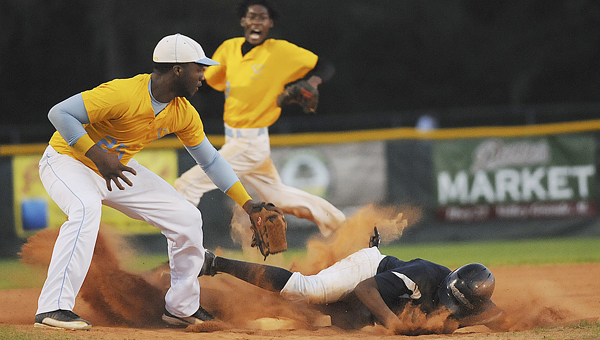 Selma’s Kiwansis Jones reaches down to try to tag a Calhoun runner out at third base during Tuesday’s game at Bloch Park. –Daniel Evans

In a game that featured more walks than hits, Selma outlasted Calhoun 14-10 Tuesday at Bloch Park.

Desmond Williams had three RBIs and Kiwansis Jones and Jekobi Lee each scored three times for the Saints, who took advantage of mistakes by Calhoun. Tigers’ starting pitcher DeJarvis McCall struggled to throw strikes and it led to a lot of walks.

Selma reached base via walk 15 times and the Saints were aggressive on the base paths to get into scoring position.

“We are a little patient at the bat, but we still aren’t hitting the ball,” said Selma coach Burrell Bonner. “We got a lot of our runs off of errors. We had runners in scoring position and we should’ve got them in but didn’t come through with the hits.”

Selma starting pitcher Wit Gunn had a shaky start too.

He walked the first three Calhoun batters and allowed three runs to score on wild pitches in the first inning. McCall, Gerald Sharp and Frtiz Lawson all walked across the plate for the Tigers.

Selma answered with patience. The Saints scored four runs in the first inning, including a single by Rondarius Sanders and a ground rule double by Williams.

After back-to-back walks to begin the inning, Gunn settled in during the second inning. He allowed a single by DeMarco Jiles that tied the game at 4-4, but gave up little else in the second inning. Gunn allowed six runs in three innings and was credited with the win.

“Once he settled down, he got into a little flow,” Bonner said.

Selma’s best offensive inning of the game came in the third inning.  After Sanders scored on a throwing error to give Selma a 5-4 lead, Williams singled down the left field line to score two runs. Brandon Moore doubled to deep left field to score Dione Allen to give Selma an 8-4 lead after three innings.

Calhoun chipped in two more runs in the third, but Selma answered with a sacrifice fly by Sanders that scored Dunn.

The Saints tacked on one more run in the fourth when Nettles hit a hard to field ball right at the second basemen, who couldn’t handle it. Allen scored on the play, extending Selma’s lead to 10-7.

Calhoun closed within one in the top of the fifth on a single by Sharp, which scored Lewis Smith and Kyle Brown.

The Saints answered with four runs in the fifth, including a double by Williams that scored a run and a single by Nettles that brought in Tevin Craig.

Calhoun made one final push. The Tigers loaded the bases in the seventh inning and had the tying run at the plate.

Nettles managed to get out of the jam, as he forced D’Andre McCovery to strike out to end the game.

“Overall, he did pretty good on the mound for me,” Bonner said.