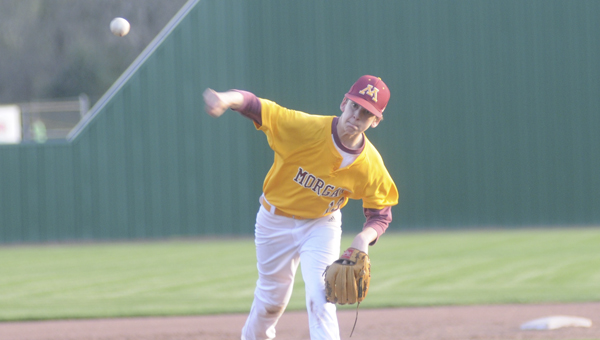 The Morgan Academy baseball team wanted to get some momentum before heading into its doubleheader at Autauga Academy Thursday. In a win over the Coosa Valley Rebels, the Senators achieved just that.

Morgan defeated Coosa Valley 7-5 Tuesday at home, as an early two-run cushion proved to be the difference in a game in which the bats came alive late.

“Every game’s a chance,” said Morgan head coach Jeremy Carter. “We’ve just got to cut down on the mental mistakes and the errors and play ball.”

Jackson Henderson drew a walk in Morgan’s first at-bat of the game. Brayton Brown singled two batters later to put two batters on base for the Senators. Bishop Price followed with a fly-out that sent Henderson home to give Morgan a 1-0 lead. Brown also scored in the inning, and the Senators led 2-0 at the end of the first inning.

Morgan’s bats went cold in the second and third inning, as Coosa Valley sliced the Senators’ lead in half in the third inning.

“They had a slow start, but they came around there around the third and fourth inning and started hitting the ball a little bit,” Carter said.

In the bottom of the fifth inning, Gunnar Henderson, Brown, Sawyer Hopkins and Britton Adams each scored for Morgan. Gunnar and Adams each singled and Brown walked.

The Senators led 7-5, and Woodham Kemmer closed out the game in three batters at the mound in the top of the sixth inning.

Landon Davis started at pitcher and Miller Spivey came in relief for a couple innings before Kemmer closed it out. Carter was pleased with the win, but he knows his team needs to be better when it faces Autauga Academy Thursday.

“We’ve just got to have that fire,” Carter said. “That’s mainly what we’re looking for. It looks like we’re too relaxed. We need to be more aggressive, so today was good mentally for them to get a win, but we’ve got to bring it because Autauga’s a good team.”

The Senators are 0-2 in their region, but they can even their region record up against the Generals Thursday.

“We still hold our own destiny in region play, so we’ve just got to make it work,” Carter said.

Morgan won its first game 17-2, and shutout the Rebels 8-0 in the second game. Senators head coach Kay Jones said her varsity players got playing time in the second game, which helped them get ready for a road trip to Autauga Thursday.

“Everybody contributed today. Everybody got to play and I’m real proud of that,” Jones said.

In game one, Morgan got out to a fast start, putting up four runs in the first inning. Following a three-run third inning, the Senators constantly had the bases loaded in the fourth inning, as seven runs scored to put Morgan ahead by an insurmountable amount.

The second game started with scored runs from Maggie Colley and Ansley Smitherman in the first inning.

After a scoreless second inning, Morgan poured on three runs each in the third and fourth innings to take the second game by an eight-run margin.