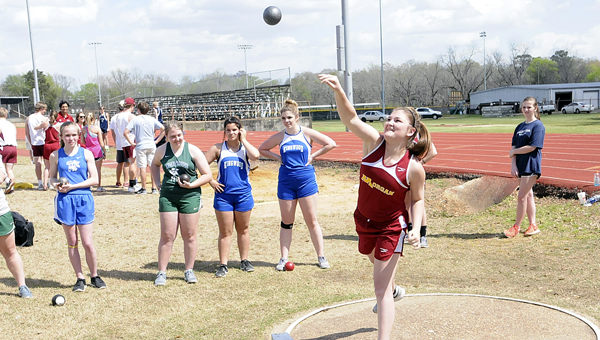 In one month, teams from around the state of Alabama will converge of Selma to take part in the Alabama Independent School Association state track meet.

On Monday, many of those teams practiced on the same track and in the same spots where they’ll be competing for state championships in April. It was the second straight week Morgan Academy had hosted a meet at Memorial Stadium and Senators’ coach Rob Robinson saw progress from his team.

“I’m very pleased,” Robinson said. “We are probably ahead of where I thought we’d be at this point. These track meets as far as team scores, they don’t mean anything. There’s only one that counts and that’s the state meet.”

There were a lot of positives for the Senators to take away from Monday’s showing.

Sanders backed up her win in the 3200 meters by finishing second in the 1600 meter run. Sanders’ Senators teammate, Laney Holladay, finished fourth.

“It was probably better than I thought I was going to do since this was the first time I’ve got to run it competing this year,” Sanders’ said of her win in the 3200 meters.

“But, the girl that was behind was only like five seconds behind me, so I’ve really got to pump up the pace.”

On the boys side, the Senators had several runners finish in the top five of numerous events.

Sam Brackin finished second in the long jump, third in the 100-meter dash and fourth in the 200-meter dash.

John Tyler Fisher was third in the shot put, Hardin Utsey was second in the 400 meter relay, Stacy Russell was fourth in the long jump and Davis Campbell finished in the top five in the 3200 meter run.

The athletes were feeling the heat on Monday. With the sun out, the temperature reached 80 degrees. Track season has just gotten underway, but many of the practices were held in cool conditions.

“I really had much training yet with the heat. I’ve just been running in the cold and haven’t gotten used to this,” Campbell said.

Fifteen schools competed in Monday’s meet, although some big names were missing. Lee-Scott, Patrician and Tuscaloosa Academy weren’t at the meet and all three typically excel in track and field.

Morgan Academy’s next track and field meet will be April 4 at Memorial Stadium. It’ll be Morgan’s last meet before the state competition gets underway April 13-14.