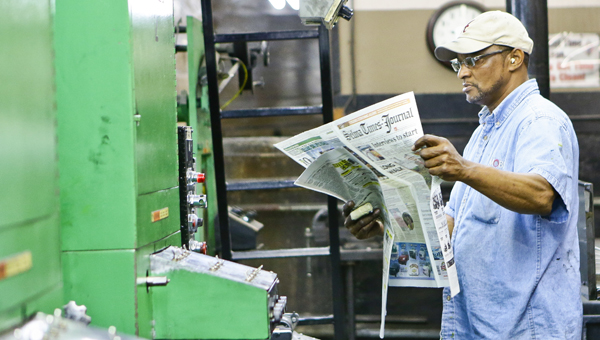 This week is known as Sunshine Week, a national initiative that serves as a reminder of the importance of open government and the freedom of the press.

News media, civic groups and other organizations from around the country take part in the week, which is now is in its eleventh year.

The Florida Society of Newspaper Editors started the initiative in 2002 after legislators attempted to create new exemptions to the state’s public records law. In 2005, the idea gained steam and Sunshine Week was launched in 2005 by the American Society of News Editors.

The week’s main goal is to makes the public aware of its right to know what their government is doing, and how they’re going about doing it lawfully.

“It would be difficult to do our jobs without access to public records and meetings,” said Times-Journal editor Justin Averette. “I think sometimes we forget how important access to public information is for our community. Transparency is always a good thing.”

The Times-Journal prints public records each day throughout the week, including incident reports from the Selma Police Department and arrest reports from the Dallas County Jail Tuesday-Saturday. The newspaper prints land transactions and fire calls biweekly.

“Public records serve as a major component of the public service mission of the newspaper,” Averette said. “We want to make sure we are providing people with as much information about their communities as possible. Not everyone has the time or ability to travel to the courthouse or police department to gather these records.”

Without the ability to gather public information, many stories could not be written. Recent story examples of the importance of public records include the release of a tape from a fatal police shooting and a series that analyzed the city council’s discretionary spending.

“These are just a few examples of the kinds of stories that would be hard to tell, if not possible, without access to public information,” Averette said. “These stories hold officials accountable to the people.”

In addition to publishing public record, Sunshine Week is an opportunity for public officials to gain a better understanding of what their requirements are under the law, including the Freedom of Information Act.

According to FOIA.gov, the Freedom of Information Act (FOIA) has provided the public the right to request access to records from any federal agency since 1967. It is often described as the law that keeps citizens in the know about their government. Federal agencies are required to disclose any information requested under the FOIA unless it falls under one of nine exemptions, which protect interests such as personal privacy, national security, and law enforcement.

“The Selma Times-Journal has used the FOIA act on several occasions to request information from municipal governments allowing us to provide previously unreleased information to the public,” said Times-Journal publisher Dennis Palmer. “We often find that information is hard to get, even with filing a FOIA request, which would seem to indicate there’s a reason a public body doesn’t want it released, but that doesn’t mean, by law, they can keep it hidden from public scrutiny. Ultimately that information belongs to the people, who are represented by public officials, and it’s the public body’s responsibility to release it when properly requested.”