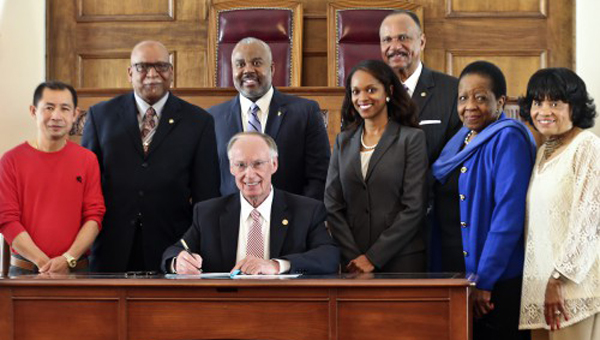 Alabama Gov. Robert Bentley signs an executive order Wednesday creating the Governor’s Office of Minority Affairs in the Old House Chamber at the state capitol in Montgomery. The office will be responsible for advising the governor on issues affecting minorities, including women. The office will focus on the improvement of the overall quality of life of minorities, specifically in the areas of education, health, economics, political participation and empowerment, housing, employment, civil rights, criminal justice and race relations.

MONTGOMERY — Gov. Robert Bentley took a step this past week to improve the overall quality of life of minorities in multiple areas of life.

On Wednesday, Bentley signed an Executive Order to create the Governor’s Office of Minority Affairs (GOMA). The GOMA will be responsible for advising the governor on issues affecting minority groups, including women.

The newly created position will focus on improving the overall quality of life for minorities in the areas of education, health, economics, political participation and empowerment, housing, employment, civil rights, criminal justice and race relations.

“Alabama has a unique history in promoting civil rights for minorities, and the courage and boldness of our citizens is a testament to the principles on which our state and country were founded,” Bentley said in a press release.

Nichelle Nix has been appointed as the Director of GOMA. Nix was most recently an attorney in the Governmental and Regulatory Affairs Division at Maynard, Cooper & Gale, P.C. in Birmingham. She is a native of Mobile and a 2002 graduate of Spelman College in Atlanta, where she received a Bachelor of Art degree in Political Science.

She earned her Master of Public Health degree from Emory University, and her Juris Doctorate from The University of Alabama School of Law in 2008.

Nix previously served as Legislative Counsel to U.S. Representative Artur Davis in Washington, D.C., a Fellow at the Alabama Appleseed Center for Law & Justice in Montgomery and Executive Director of the Sickle Cell Disease Association of America in Mobile.

Nix said she will focus on the opportunities and well-being of minorities and women and that she looks forward to building coalitions to make Alabama a better state for everyone.

“My goal is to make Alabama stronger, and minorities and women are an important component of the Great State 2019 Plan,” Bentley said.