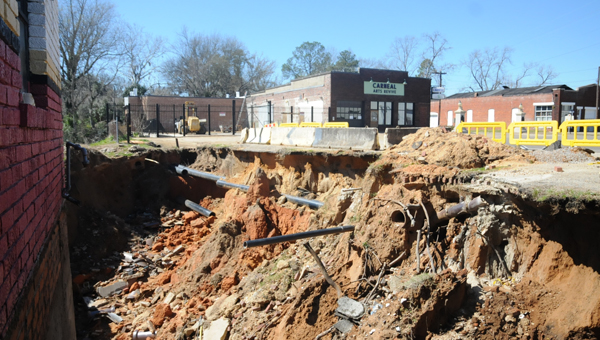 The Selma City Council awarded a $242,000 bid Tuesday to REV Construction, Inc. out of Tuscaloosa to repair a cave-in along Water Avenue.

The bid for construction to repair the cave-in at the intersection of Water Avenue and Church Street has been approved. Now, it’s time to get to work.

REV Construction, Inc. in Tuscaloosa will begin construction in the next couple weeks to repair damaged pipes and erosion.

The $242,050 bid was approved at a city council meeting Tuesday.

How to fund the construction will be discussed at the next city council work session.

City contract engineer Ray Hogg said everyone with the city believes the issue needs to be addressed.

“They’re all aware it has to be done, and it was an easy process after that to approve it,” Hogg said.

In the fall of 2015, REV Construction repaired damages to the road on Lauderdale Street.

“They did a good job on that project and I’m confident that they will do a good job again,” Hogg said.

The first step once construction begins is to fix the drainage pipes to get everything stabilized.

The construction will take between 30 and 45 days. Hogg said he hopes it will be closer to 30 days, but bad weather could delay construction.

Hogg said he was pleased with the bid’s approval because the issue needed to be addressed.

“The problem is only going to continue to get worse if we don’t go ahead and get it fixed,” Hogg said.