Morgan drops to 0-2 in region, falls to Autauga 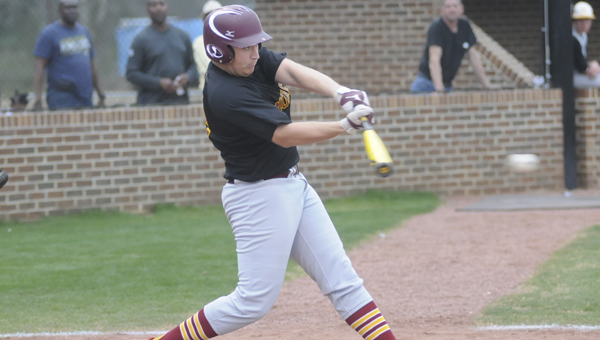 Morgan Academy’s Sawyer Hopkins gets a hit during the Senators’ home game Thursday against the Autauga Academy Generals. The Senators fell to the Generals 6-2. — Justin Fedich

After six innings of trying, the Morgan Senators finally got the bats going in the seventh inning. Woodham Kemmer and Jackson Henderson crossed home plate as the Senators began to rally back from a 6-0 deficit. Three batters and three outs later, the game was over.

Morgan (9-6) lost its second straight region game Thursday on its home field in a 6-2 loss to the Autauga Academy Generals. Jackson pitched six innings, but Morgan’s bats couldn’t keep up.

Morgan held Autauga scoreless through the first two innings, but the Senators failed to capitalize. In the bottom of the second inning, Miller Spivey walked and Landon Davis beat a throw to first base on a bunt. A Kemmer groundout ended the inning, however, and the score remained tied 0-0 going into the third inning.

Autauga’s Trey Turner crushed Jackson’s pitch over the right field fence in the top of the third inning for a two-run home run to give the Generals a 2-0 lead.

Jackson opened the bottom of the third inning with a single to shallow right field, but the rest of the Morgan lineup was unable to help him out.

With two outs in the top of the fourth inning, Autauga added to its lead with an RBI single. A bases loaded hit a few batters later sent one runner home. Shortstop Gunnar Henderson drilled a throw to home plate for Jackson to tag a runner for the third out.

At the bottom of the fourth inning, Morgan trailed 4-0. Landon Davis and Philip Peake each got on base, Davis was stranded on third base as the Senators’ scoring drought continued.

Jackson kept the Autauga batters off base in the fifth inning, as a diving stop by Gunnar

at shortstop and a throw to first base gave Morgan its third out of the inning. The Senators failed to get on base in the bottom of the fifth inning.

The Generals got on base in the top of the sixth inning, but a sliding catch by Bishop Price’s right field allowed Morgan to go two straight innings without allowing a run. After Morgan went another inning without a run, Autauga added to its lead with Sawyer Hopkins on the mound.

An errant throw to first base sent Noah Mills home to put the Generals up 5-0. Turner hit an RBI to send Mason Friday home, and Autauga extended its lead to 6-0. Joshua Criswell caught a foul ball for Morgan for the third out in the top of the seventh inning.

The Senators finally found their offense in the bottom of the seventh inning. Kemmer opened with a single and Jackson followed with a double to left center field. Brayton Brown swung on a third strike, but the ball rolled past the catcher to allow Kemmer to stroll through home plate.

After an Autauga pitching change, Price drilled a single to send Jackson home. After Price’s base hit, Gunnar flew out, Hopkins struck out and Spivey couldn’t quite fit a line drive through the hole between third base and shortstop.

“They’re a solid team. They hit the ball. They put it in play,” Carter said. “They make you make the mistake. That’s right now what separates us from them is they’re hitting the ball right now and we’re not.”

The Morgan Academy softball team fell in three innings 15-0 to the Autauga Academy Generals Thursday at Morgan. After falling behind 11-0 in the first inning, the Senators couldn’t recover.

The game was cut short to three innings when Autauga added two more runs in the second and third innings to take a 15-0 lead.

“They didn’t give up,” said Morgan head coach Kay Jones. “They kept coming up there and doing their best. They had smiles on their face and they kept trying. This is a growing year and I think they learned a lot. The thing I like is there’s no give up in them. No quit. They kept trying hard.”