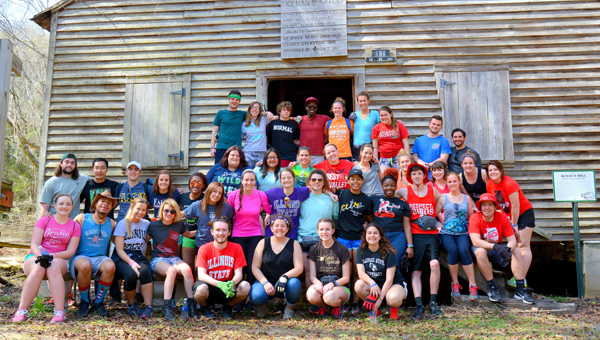 A group of approximately 40 Illinois State University students traveled to Selma earlier this week to volunteer at Kenan’s Mill ahead of the upcoming Pilgrimage.

The group was working with the university’s Classic 2 Pay It Forward Tour and are part of an organization called Students Today Leaders Forever (STLF).

“This is like an alternative spring break for them,” said Kenan’s Mill chairman Sylvia Smith.

Selma was the last stop for the students before heading to Atlanta, their final destination. Students also visited Memphis, Tennessee; Hattiesburg, Mississippi; New Orleans, and Navarre, Florida. Each day the students visited a new location and completed a new service for the area.

St. Paul’s Episcopal Church hosted the group and provided breakfast for them on Wednesday.

“They were here for just a morning so it wasn’t like you could renovate a house or something,” Smith said. “I said, ‘Well all these storms have brought down a bunch of branches and they need to be picked up before they can mow and get grounds looking nice for Pilgrimage.’”

In addition to work at Kenan’s Mill, students had the opportunity to tour and visit local landmarks such as the Brown Chapel A.M.E.Church and the Edmund Pettus Bridge.

Smith said the students were very curious about Selma.

“We had a really good chance to talk to a lot of them,” she said. “They had no idea what Spanish moss is.”

After the students finished their work, they enjoyed a pizza picnic before heading off to Atlanta.

“I hope they learned some good things about Selma and I enjoyed meeting them. It was a very nice group, and I think we had some good conversations,” Smith said.

In Atlanta, the students will be meeting other STLF groups to work on one large group project.