John Lewis encourages churchgoers to get in ‘good trouble’ 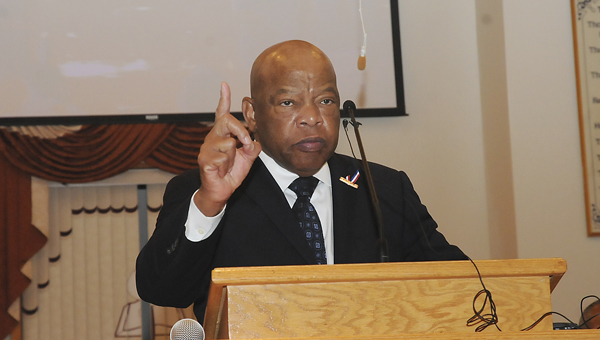 It’s been 51 years since U.S. Rep. John Lewis led the Bloody Sunday march with the Rev. Hosea Williams across the Edmund Pettus Bridge, but Lewis still remembers the details as if it happened yesterday.

“They came toward us, beating us with nightsticks, trampling us with horses and releasing their tear gas. I was hit in the head with a trooper with a nightstick. My legs went from under me. I thought I was going to die. I thought I saw death,” Lewis said.

On Sunday morning at Ebenezer Missionary Baptist Church, Lewis retold his story of the march to a packed house. While he told stories of the history, his message was to keep fighting for justice and equality.

As he clenched his fists with passion, Lewis encouraged people to stand up and speak out.

Lewis never took his eyes off the goal, no matter the price he would pay. At 25 years old, he stood at the top of the Edmund Pettus Bridge with Williams and saw a line of Alabama state troopers ready to do whatever they could to make sure Lewis, Williams and those who followed weren’t going to advance any further.

Williams turned to Lewis and asked if he could swim.

Many others who have played integral roles in pushing forward for civil rights were also in attendance at the church, including Dr. F.D. Reese, Tuskegee Mayor Johnny Ford and Lynda Blackmon Lowery.

Lowery, the youngest person to march all the way from Selma to Montgomery in 1965, was awarded the Free Thinkers Award Sunday morning. She said she was honored to receive the award. Like Lewis, Lowery accepted the award with humility.

“I never thought that when I went to jail…that I was doing anything significant,” Lowery said. “All I know is at 7 years old, when my mother died because she could not get the blood she needed because of the color of her skin, I made a vow that when I grew up, I would change that.”

In the 1960s, Lowery and Lewis both felt compelled to make a change not out of desire, but out of necessity. Lewis saw that there were some counties with a population 80 percent African American, yet none of them were able to vote. He knew that wasn’t right.

At church Sunday morning, Lewis implored everyone to get in trouble if they see something they know isn’t right, much like he did on the Edmund Pettus Bridge 51 years ago.

“I got in the way. I got in trouble. Good trouble,” Lewis said.