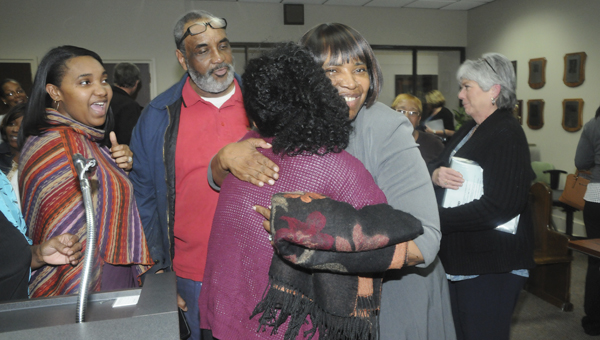 Hattie Shelton will be the Dallas County Schools System’s next superintendent.

Shelton is the assistant superintendent and was promoted to the top job during Wednesday’s board of education meeting.

Shelton was chosen out of seven finalists who interviewed for the job. She was nominated by board member Leroy Miles and had four out of five votes. Board member William Minor, who had nominated Isaac Haynes, was the only person who did not vote in her favor.

Miles said he thought Shelton was the best fit because of her years of work with the Dallas County system.

“Ms. Shelton has been in this system for a number of years. She has proven on every level, elementary, middle and high school that she can handle this position,” Miles said.

Shelton said she looks forward to the promotion and is aware of what the needs are in the system.

“I am very excited, somewhat overwhelmed. However, I’m glad the board had enough confidence in me to vote me in. I have been taking notes of things I would like to put in place,” Shelton said.

One focus will be taking a close look of what training is needed for teachers.

“I just want to say thank you to Dallas County and want them to know that I am the person who will help their children move forward,” Shelton said.

Board president Carolyn Bates said she feels Shelton is a good choice because of her track record and the relationship she has with parents throughout the community.

“When it comes down to a superintendent they need to have leadership skills. I listened to the community and looked at Shelton’s record. I believe she has the potential to get those skills together and lead our school system,” Bates said.

She said she feels the board will work collectively to support Shelton.

“All our board members will support Ms. Shelton, regardless of how the vote went,” Bates said.

Superintendent of the Dallas County Schools Don Willingham said he was satisfied with the board’s choice of Shelton as his successor. Shelton has worked alongside Willingham for the past three years.

“Ms. Shelton is an outstanding choice. She is a natural fit for it and she cares about Dallas County and that is so important. This is a tough, demanding job, but she will do well,” Willingham said.

The board has not decided Shelton’s official start date. Board members have not decided if they will fill Shelton’s assistant superintendent position or not.

Shelton received a master’s of arts degree in special education at the University of Alabama at Birmingham in 1990. She also graduated from the University of West Alabama in 1997 with a major in educational leadership and in 1982 from UAB with a bachelor’s of science degree in mathematics. She served as the principal at Tipton-Durant Middle School and Bruce K. Craig Elementary School before becoming a supervisor with the Dallas County Board of Education in July 2012.