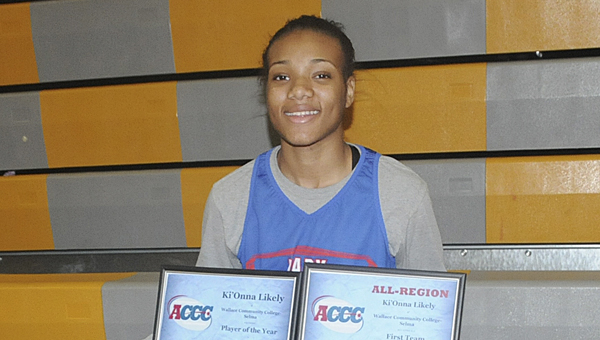 The Wallace Community College Selma Patriots are one game away from clinching a spot in the National Junior College Athletic Association tournament, and sophomore Ki’Onna Likely has been a big part of the putting her team in the position its in.

The Southside High School graduate said she’s been a leader on her team all season, but she was still shocked when she found out she had won four awards.

“It all started when my teammates kept feeding me the ball,” Likely said. “I had to take a leadership role. I was very surprised to win player of the year because they never selected me for player of the week throughout the whole season.”

As the season has progressed, Likely said she’s been drawing more pressure from opposing players. Likely said she takes advantage of this by finding open players whenever she has extra coverage.

“Once they see Wallace Selma, they just focus on me, but we have a lot of players that can step up,” Likely said.

Still, Likely has managed to dominate the stat sheets on a consistent basis. This season, Likely has averaged 21.3 points per game and shot 60.7 percent from the field, both of which lead the ACCC.

Wallace head coach Herman Turner said he think Likely has a bright future in basketball after this season. One of Wallace’s former players who now plays professionally in Romania, Ashley Grimes, has told Likely to continue to work hard and she can reach her goals.

Turner has no doubt Likely can someday play professionally too if she keeps working hard. He said at the game Tuesday, there were multiple college scouts in attendance to watch Likely.

“She’s proven that she can compete at that next level,” Turner said.

Thursday’s game against Shelton State will test Likely and the Patriots.

Wallace is coming off a 77-74 win over Gaston College Tuesday. Turner said it won’t be easy getting past Shelton State, but he believes anything is possible.