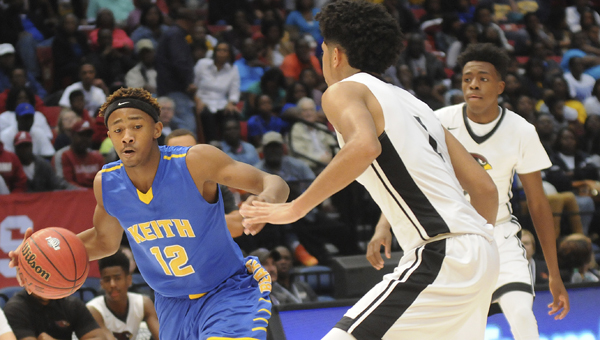 Keith’s Justyn Pettway looks for dribbling room in a class 1A state tournament game against Sacred Heart. The Keith boys joined the Keith girls this season in becoming one of just five teams in Alabama whose boys and girls teams made it to the final four teams in their state tournament. Both Keith teams lost Thursday in Birmingham. — Daniel Evans

After both Keith boys and girls basketball seasons came to an end, it stopped a two-year streak of a school from Dallas County winning the state championship.

Just because Dallas County doesn’t have a state championship representative this season, it doesn’t take away from the success Dallas County has enjoyed over the last five years.

In 2011, the Keith boys made the state finals. Two years later, in 2013, both the Southside boys and Keith girls made it to their respective state championship games.

After both Keith teams became the last four teams standing in their class this year, Dallas County Superintendent of Schools Don Willingham said he is proud of all Dallas County schools for their accomplishments on the basketball court in recent years.

“These last three years have been just tremendous athletically for our schools, and the enthusiasm, the school spirit and morale is always so high when the programs are doing well,” Willingham said.

Willingham said he is proud of how basketball has given the athletes opportunities not only to succeed on the court, but also to further their education in college.

Fan excitement has also increased. The players don’t always bring home a state championship, but the teams in Dallas County are always generating plenty of conversation around the state.

“It’s such a bonus for the school systems and the schools, so I’m awfully proud of the coaches for the time they’ve put in and the students for making it as far as they did,” Willingham said.

The Black Belt has produced great basketball talent in past years. Although Dallas County doesn’t have any teams remaining in the state tournament, the R.C. Hatch girls are playing for a class 2A state title.

Willingham, who announced he would retire at the end of the school year, said next year is going to look different with many good players graduating, but he believes the future is bright for all the basketball teams in Dallas County.

If the city’s softball camp held Saturday was any indication, this year’s city softball league will be gearing up for... read more