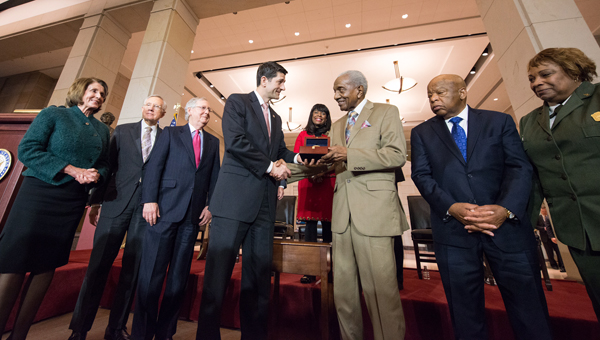 The Rev. Frederick D. Reese accepted the Congressional Gold Medal this week in Washington, D.C. on behalf of all foot soldiers who participated in the 1965 Selma to Montgomery marches.

The award was presented at Emancipation Hall in the U.S. Capitol’s Visitor’s Center. All House and Senate leaders, including Speaker Paul Ryan, Mitch McConnell, Nancy Pelosi and Harry Reid, participated in the ceremony.

“Rev. Reese was the leader of the Dallas County Voter League that first invited Dr. King to Selma. For over 50 years, Rev. Reese has stood as a stalwart of the voting rights movement,” said Congresswoman Terri Sewell, who represents her hometown of Selma. “His acceptance of this Congressional Gold Medal is emblematic of everyone who marched, prayed and died in the pursuit of civil and voting rights in America.”

Reese said he was humbled to represent thousands who marched from Selma to Montgomery and many more who support the effort in some way.

“It was quite unexpected, but surely I accepted the award,” Reese said. “I just give all the thanks to Almighty God for having led me through many dangers seen and unseen and allowing me to be there to receive an honor.”

Voting rights activists led by now Congressman John Lewis and the late Rev. Hosea Williams, were brutally attacked by Alabama State Troopers on the Edmund Pettus Bridge on March 7, 1965. This day, now known as Bloody Sunday, was the first of three eventual planned, peaceful protests from Selma to Montgomery.

Ultimately, an estimated 8,000 marchers left from Brown Chapel A.M.E. Church on March 21, 1965, and successfully marched to Montgomery to protest unfair voting laws that kept blacks from voting. The marches lead to the passage of the Voting Right Act of 1965 less than five months later.

The Congressional Gold Medal is one of the highest honors civilians can earn in the United States. Since the American Revolution, Congress has commissioned gold medals as its highest expression of national appreciation for distinguished achievements and contributions by individuals or institutions. The second Continental Congress first awarded the medal in 1776 to General George Washington.

Some past medal recipients include those who died in the 9/11 terrorist attacks, the Tuskegee airmen, the four girls who died in the 16th Street Baptist Church bombing, the Little Rock Nine and Rosa Parks.

Reese said he is grateful for the all the attention that has been given to the marchers, especially in the past year.

“It means that things that I’ve gone through and various sacrifices that were made now seem all worth it,” Reese said.

Sewell, who was born in 1965, said she owes much to the bravery of the foot soldiers.

“As a direct beneficiary of their sacrifices, I am honored that we finally pay tribute to these heroic men and women with the highest civilian honor Congress can bestow. It is because of the Foot Soldiers that I have the privilege of being the first black Congresswoman to represent the State of Alabama,” Sewell said. “While we can never truly repay the Foot Soldiers for the sacrifices they made, we honor their legacy by continuing the ongoing fight to preserve and protect the voting rights of all Americans.”