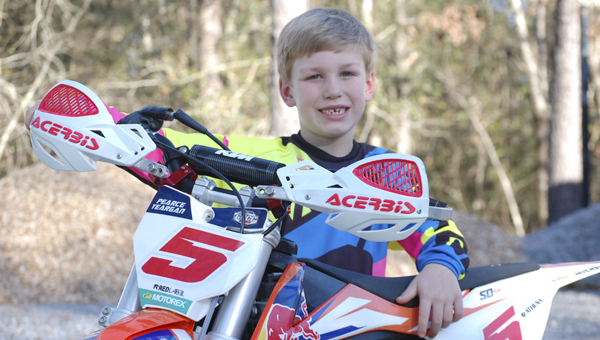 Pearce Yeargan, 7, will represent the state of Alabama in the KTM Jr. Supercross Challenge Saturday at the Georgia Dome. Yeargen wears the No. 5, which is the same number as his favorite rider, Ryan Dungey. –Submitted Photo

A 4-year-old Pearce Yeargan sat with his family in the Georgia Dome as they watched a professional motorcross rider named Ryan Dungey compete against others in Atlanta.

“Daddy, will I ever get to do that?” Pearce asked his father Brad.

Only three years have passed since that day, but Pearce already has his answer.

Pearce, a 7-year-old from Stanton, will be one of 15 riders from across the country competing in the KTM Jr. Supercross Challenge Saturday at the Georgia Dome. The competition takes place at multiple locations around the country, featuring dirt bike riders that are 7 and 8 years old. Pearce was selected as the lone representative from Alabama.

“We could never in our wildest dreams ever imagine that he would be the only kid from Alabama chosen to participate in such a huge sporting event,” said Pearce’s mother Brittany Yeargan.

Pearce’s passion for dirt bike riding began early on his life. When he was 2 years old, he got a Honda bike with training wheels. By the time he was 4, he didn’t need the training wheels any more.

Brittany said Pearce wanted to take the dirt bike out with Brad every afternoon.

Brad happily agreed to give Pearce every opportunity to succeed on a dirt bike. Brad’s father rode dirt bikes and so did Brad. When he found out he and Brittany were going to have a son, he knew he wanted him riding dirt bikes too.

Early in Pearce’s training, Brad used tough love to teach Pearce how to be a talented rider. One of the first times Pearce wrecked on his bike, Brittany and Brad were not far behind him watching.

Brittany wanted to help her son, but Brad insisted she let Pearce get up on his own.

“He said ‘No. He’s got to learn how to do it himself,’” Brittany said. “And it broke my heart sitting there, watching him get the bike off of him, get up and start again. But now I look back, it all makes sense.”

Although Pearce will be riding in a supercross competition Saturday, he spends most of his time riding harescramble, which involves navigating through wooded terrain rather than focusing on jumps. Brittany said she’ll be more nervous watching him ride motorcross Saturday than when he rides harescramble because she’ll be able to see him the whole time.

Even though motorcross isn’t his specialty, Pearce said he is excited to ride the motorcross course in Atlanta. He said he is hoping for at least a fourth or fifth place finish.To sign up for the KTM Jr. Supercross Challenge, Pearce needed to provide a report card, a letter from the doctor, a letter from a teacher and a two-page resume. For the competition, Brad will serve as Pearce’s mechanic.

Brittany said she has enjoyed watching Brad and Pearce bond through their love of dirt bike riding.

“It’s amazing to watch the two of them bond together,” Brittany said.

“As a mother that is so special to me.”

On Saturday, Pearce will be riding bike No. 5. He has always rode that number, which is the same as Dungey, who Pearce has idolized since he watched him in the Georgia Dome.

“Pearce has always looked up to him,” Brittany said.