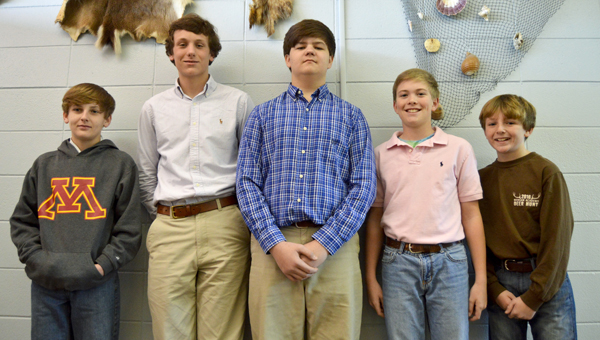 The four older students, Reeves, Waters, Trevor and Thomas advanced to the state science fair, which will be Thursday at Huntingdon College.

Reeves, 14, placed second in the Junior High division at the local level and first place at district. His project titled, “Rusting in the Rain,” tested different types of acid rain on steel wool to see which would corrode quicker.

“This is not my first time going, but it’s still pretty exciting time going to state,” Waters said. He said he has qualified for state four other times.

Trevor, on the other hand, said this is his first time qualifying for state.

Thomas, 12, placed first in the elementary division at local and sixth place at district. For his project, he tested different types of paper towels to see which absorbed more water. This is the second year he has qualified for state.

Cole, 11, said this is the first year he has competed in the science fair and will probably compete again next year. His project, “Is Floating Just for Magicians,” discussed the force and attraction between magnets.

Science teacher Judy Bonds said the students were judged on their ability to follow the scientific method. This includes picking and researching a topic, experiment and reporting results with a conclusion. She said students are often asked to present their results in charts and graphs.

At state, students are required to complete an interview and provide a research paper. Interviews were not conducted at local or district levels and supplying a research paper was optional.

Bonds said the school encourages students to participate in the science fair by offering them extra credit and exemptions from select exams if they place at district. She said participation this year was low, but students who participate generally do well.

“We actually have about that same number each year to go on to state,” she said.

She hopes next year more students will participate because academic activities look good on resumes when students apply for college.