Tate back to work after heart scare, procedure 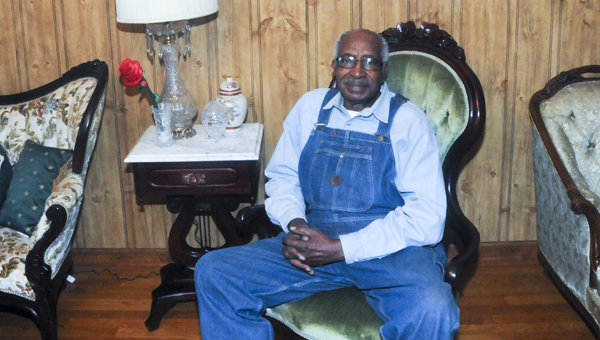 In the summer of 2014, former police chief Earnest Tate has a relatively new heart procedure done at UAB.

Earnest Tate hadn’t skipped a beat since his retirement from the Selma City Police Department in 2002.

After serving as the city’s first black police chief, Tate dedicated his time tending to the family farm.

About two years ago, the 79-year-old started noticing some changes in his health.

“That’s when I found out I had a heart problem,” Tate said.

He soon learned he had a condition called aortic stenosis.

According to www.mayoclinic.org, the condition occurs when the heart’s aortic valve narrows. It obstructs blood flow from the heart into the aorta and to the rest of the body.

“I tried to not show sickness, but since my wife was a nurse she still saw it,” Tate said. “It made a big impact on my whole family. I never got scared because I never had time to get scared.”

After going back and forth between different doctors, Tate said his condition was getting worse. It was his wife Norma Jean who tried to get an appointment with doctors James Davies and Oluseun Alli at University of Alabama at Birmingham Medical Center to find answers.

“They called that Friday and said that the wouldn’t have any openings until July 15, and I told them he won’t be here July 15,” Norma Jean said.

Because of how sick Tate was, he could not have open-heart surgery, so he had transcatheter aortic valve replacement (TAVR).

This less invasive procedure allows a new valve to be inserted within the native, diseased aortic valve.

In the TAVR procedure, a replacement valve is placed inside a catheter.

The catheter is then threaded through blood vessels in the leg or through the chest of the patient.

The valve is then positioned into the old valve while the heart is still beating. The heart is able to pump blood through the replacement valve normally.

Tate’s niece Doris and two sons Ricky and Terry accompanied Norma Jean on July 1, 2014, to be with Tate every step of the way during his hospital stay.

Tate was released from the hospital on the July 5.

A few weeks after at a follow-up appointment where his blood was tested, he was told the results from the surgery were remarkable and that he wouldn’t have to make another doctor’s visit for one year.

Tate said that at this point he felt great.

“I had no soreness, no pain,” Tate said.

This August will mark a year since his follow-up appointment and he will go back for a checkup on how his heart his doing.

Tate said that since the surgery he has not felt any pain.

“He is just like he used to be. Before he had the surgery, he couldn’t walk, he couldn’t eat and he was scared to go to sleep because he thought he wasn’t going to wake up. He just couldn’t do anything really,” Norma Jean said. “Since he had it, it’s better now.

UAB was the first hospital in the state of Alabama to perform the TAVR procedure, in 2012. More than 300 total cases have been completed since then. Sasse says his staff averages four or five per week.