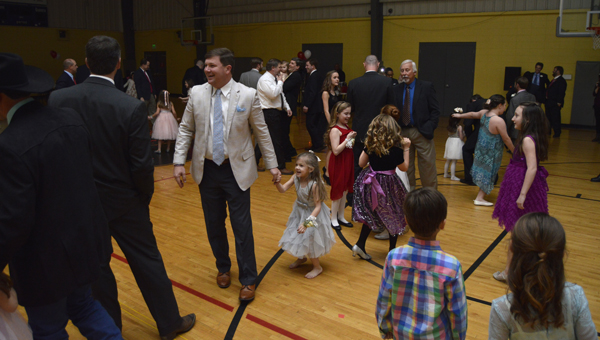 Fathers and daughters dressed to impress and danced their shoes off Friday night at the second annual father-daughter dance at the Selma-Dallas County YMCA.

“We just thought it was a fun idea for little girls to get all dressed up and be escorted by an important man in her life,” said Ann Murray, local YMCA chief executive officer.

Murray said even though the dance is a daughter-father event, other male figures such as uncles, grandfathers and church deacons were welcomed to be escorts for the girls.

The dance began at 6:30 p.m. in the basketball gymnasium. The room was decorated in pink and red balloons, Christmas lights and heart shaped garland.

Pink beverages and heart shaped cookies were served as well as chicken fingers, chips and crackers. Just before 7 p.m., fathers and daughters lined up for call-outs. The father announced his and his daughter’s names and escorted them down an aisle covered in pink and red confetti.

“It’s very well-attended,” Murray said. She said this year they had roughly 130 father and daughters in attendance — an increase of more than 40 compared to last year.

After call-outs, the lights were dimmed and the DJ cranked up the music for dancing.

Spence Roe and Andee Fancher, age 11, said this was their first time attending the dance. Fancher said she enjoyed dancing and the music the most.

“I had lots of fun,” Fancher said. “I liked the songs they played. They played a lot of good songs.”

Murray said since this dance has become increasingly popular, the YMCA will continue to host the dance in the future.

“This is going to be on our calendar for now on,” she said.