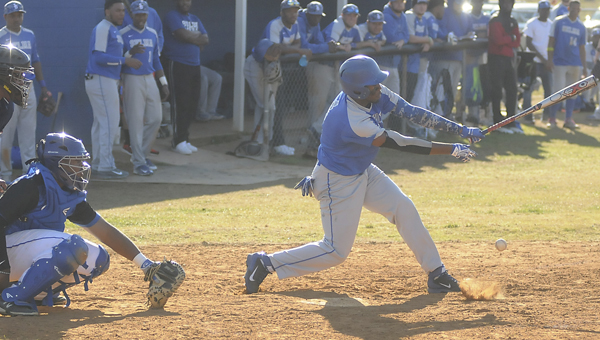 Selma University’s Deshun Bolling hits a ground ball as his teammates watch on from the dugout during the Bulldogs’ second game in a doubleheader against Rust College. Selma University won both games by a combined score of 26-3. — Justin Fedich

Ten different Selma University baseball players crossed home plate in the second game of a doubleheader to complete the sweep over Rust College.

The Selma University Bulldogs (3-1) beat the Rust College Bearcats 14-2 in five innings on the back end of an afternoon home doubleheader Friday. The Bulldogs led 8-0 at the end of three innings and scored another six runs in the fourth inning to put the game away.

“We started out pretty early,” said Selma University head coach Adrian Holloway. “We jumped on them good. Hit the ball well. Our defense was pretty solid all day, and we had good pitching.”

Carmen Monroy was the winning pitcher for Selma University, as he allowed no earned runs in four innings pitched. He struck out three batters and only walked one in 16 at bats.

Kelvin Gullatte finished out the game for Selma on the mound in the fifth inning.

In only five innings, Selma managed 11 hits as nearly everyone in the lineup got involved in the scoring.

Tremayne Hopps also added two stolen bases. Dexter Hawkins gave the Bulldogs their 14th run when he darted home from third base after an errant throw allowed him the opportunity to score.

Selma allowed two runs in the fifth inning, but the game was all but over at that point.

Harris led the way in game one with five RBIs, as the Selma University Bulldogs opened Friday strong with a 12-1 win over the Rust College Bearcats at Selma University. Pedro and Arniel Rivera each produced three runs for the Bulldogs in a game that was once again decided in the fourth inning.

The Bulldogs got out to a 2-0 lead in the first inning, but then had their only scoreless inning of the day in the second inning. Selma scored only one run in the third inning, but rattled off five runs in the fourth inning, taking an 8-0 lead over Rust heading into the fifth inning.

The Bulldogs outscored the Bearcats 4-1 to give themselves momentum heading into the second game with an 11-point victory.

Juan Ayala secured the win at the mound for Selma, pitching all five innings and only allowing one run.

Selma stole six bases in game one, including a pair from Hopps. The Bulldogs also didn’t commit a single error in the first game and only committed one in the second game.

“We played solid defense, ran the bases well, got a lot of stolen bases today,” Holloway said. Played great defense behind our pitching and just had some good timely hits. Just played our brand of baseball today and got two Ws. “

Holloway said he knows his team is capable of playing even better, and he is hopeful that a pair of convincing wins will give his players the boost they need moving forward against tougher opponents.

“That is huge for our confidence going forward,” Holloway said. “This is a confidence-builder going into another tough weekend.”

If the Selma girls are going to make it to Montgomery for the regional portion of the playoffs, they’ll have... read more