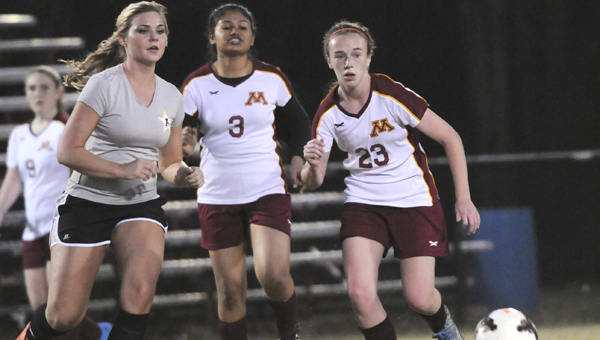 Morgan Academy’s Jordan Harrison, right, and Krishna Patel, middle, chase after a ball during Morgan Academy’s home game against Autauga Academy Friday. Harrison scored the lone goal of the game off a free kick to lead the Senators to a 1-0 victory over the Generals. — Daniel Evans

Morgan Academy’s Jordan Harrison scored on a free kick early in the second half to lead the Senators past Autauga Academy 1-0 Friday night.

Harrison curled the ball around four Autauga defenders and it went in, giving the Senators the lead on one of their first true scoring threats of the game.

“Considering that it was our first goal of the year… that goal was big,” said Morgan co-head coach Larry Poe. “We should’ve had more scoring chances than we did. We made some mistakes that we’ll be working on, but overall I’m real proud of our girls. They played hard and came out with a win in their first game, so I can’t ask more than that.”

Autauga had five shot attempts on goal in the first half, but Senators goalie Sarah Combs turned them all away. At that point, the Senators hadn’t had a lot of scoring opportunities.

Early in the second half, Harrison got tackled on the Senators end of the field, allowing for a free kick. After she scored, the Senators celebrated briefly before turning their attention to defense.

Every time Morgan was seriously challenged, Combs found a way to stop shots.

In the second half, she had to run up to stop several Autauga looks, including one that had her turned around and was just inches from crossing the line. Somehow, she found it in time to keep Morgan’s lead in tact.

“I probably should’ve got that, but I’m glad it didn’t go in,” Combs said.

Jaycee Sanders and Gilly Minter also helped stop several promising possessions for Autauga before they could challenge Combs at the goal.

“They were the anchor of our defense tonight,” Poe said.

The Senators play their next game at home against Fort Dale on Monday. Combs said Friday’s win should give the team confidence going into that one.

Morgan Academy goalie Alek Poe was busy during the first few minutes of Friday night’s match against Autauga Academy. The Generals had two good looks in the first five minutes, including one where Poe had to slide to the ground to grab the ball.

The next 35 minutes of the first half were nowhere near as eventful for the Morgan Academy goalkeeper. The Senators possessed the ball the majority of the rest of the first half and methodically pulled away for a 4-1 victory.

After controlling the ball seemingly the whole game, Morgan (1-0) finally broke through on Calvin Oslund’s shot at the 38th minute. The ball bounced off Autauga goalie’s Hunter DeVaughn hands and found the net, giving the Senators a 1-0 advantage at halftime.

In the second half, the Senators quickly built onto their lead.

Mac Beers scored on a high shot that arched over DeVaughn’s head during the 42nd minute to make it 2-0.

During the 58th minute, Morgan’s Stacy Russell’s raced to the end of the field to keep the ball alive. Once he regained control, he kicked the ball toward the net, where Daniel Portwood found it and kicked it through the net.

The Senators added another one from there.

Russell scored on a breakaway to give Morgan a 4-0 lead. It was the first goal of his career.

“He happened to be the right spot at the right time,” Minter said. “I was tickled for him.”

Autauga added a goal in the final minutes to get on the board, but at that point the match was well decided.

Selma University’s Deshun Bolling hits a ground ball as his teammates watch on from the dugout during the Bulldogs’ second... read more