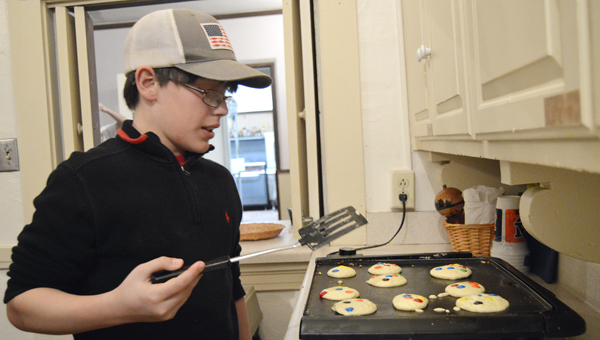 By Emily Enfinger
The Selma Times-Journal

“This is the highlight of the year,” said Rachel Colley, director of Little Friends Preschool.

Colley said every year the preschool hosts a show featuring art students created throughout the year.

“We try to do things that incorporate the children’s handprints, footprints, fingerprints, things that they have done — keepsakes for mom and dad,” Colley said. “The 4-year-old class, a lot of their artwork is done all by themselves. They take pride in that.”

Fifty students had art in the show. Colley said some classes had more art works per student than others, depending on the projects the teachers had planned.

Danica Franks and Allie Bennett, both age 5, had art in the show. Franks and Bennett said they finger painted and melted crayons with hairdryers to make rainbows.

“I love the rainbows,” Bennett said.

This year is the first time the art show has been shown at St. Paul’s. The show is generally held across the street at the preschool.

“We try to do it in conjunction with Shrove Tuesday since we are part of the Episcopal Church,” Colley said. “Since we do it on Shrove Tuesday, the church has a pancake supper that night.”

Colley said it was held at the church this year to help benefit the Pancake Supper for St. Paul’s youth group. This year the youth group is planning a trip to Orlando.

“So it’s really killing two birds with one stone — we get everything done in one night,” she said. “Parents can come, see the art and go upstairs and eat pancakes.”

Claire Mosley, youth rector at St. Paul’s, said the pancake supper is a tradition the church has partaken in for over 30 years to recognize Shrove Tuesday.

“It’s the last day before Lent starts … Today is the day of the feast,” Mosley said.

Drew Hisel, age 12, was in charge of making the M&M pancakes. He said the M&M and chocolate chip pancakes were the most popular.

The pancakes were free, but the youth accepted donations.

“We have a pretty good crowd,” Mosley said.