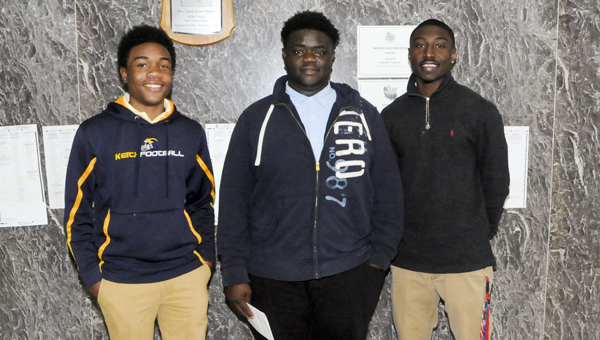 By Chelsea Vance
The Selma Times-Journal

Many Keith High School seniors are registered to vote, thanks to a field trip students at the school took Tuesday.

Keith students took a trip to the Dallas County Board of Registrar’s Office Tuesday, where those 18 and older were eligible to register to vote ahead of the March 1 primary.

Younger students tagged along so that they could learn how the process of registering to vote works.

Senior class president Brian Crum said registering to vote is important for he and his classmates to do as early as possible.

“I think it will help some people to be more likely to vote because a lot of people really don’t have anybody to push them to vote,” Crum said.

”It’s important because we used to not even have the right to vote and now that we can. It is a good thing.”

Joshua Thomas is a senior and the first president of the new Student Government Association at Keith. He said voter registration is something to be taken seriously and made it a point to get that message out to other students.

“When I heard about the trip, it was something I thought was interesting,” Thomas said. “It’s important because they can understand now how important it is to vote.”

He has hopes that those who register to vote can influence younger students to do the same when they get of age.

There are about 53 students in the senior class and Curtis Bell, a history teacher at the school, said all of them registered.

Registrar Walter McCrimmon explained to the students how registration forms were processed.

“They need to understand it’s not much of a process. It’s really short,” McCrimmon said. “

McCrimmon told them about identification cards required to vote and answered any questions they had.

“We want to make sure that they receive the opportunity to vote given to them by their ancestors,” Bell said. “Sometimes students get in the shuffle of life, and they forget about the rights and liberties that they have.”