Keith hopes to sweep as 1A champs 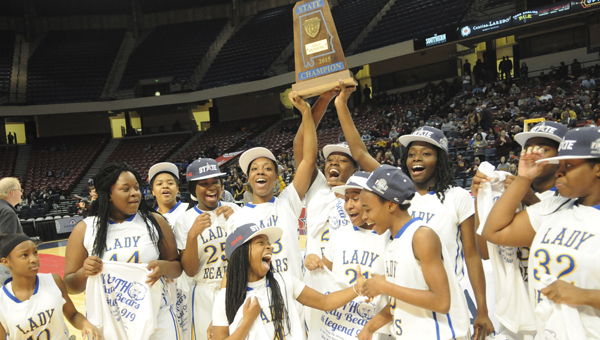 The Keith girls’ basketball team celebrated a class 1A state championship Feb. 27, 2015 with a 38-25 victory over Spring Garden. With many of the same players on this year’s team, the Bears are hoping to make another magical postseason run. — File Photo

ORRVILLE — The Keith girls’ basketball team won the class 1A state championship last season, and the players feel they’re even more ready to win in the postseason this year.

“Last year, we were here but we weren’t as experienced and we didn’t know as much as we knew last year, so I think now we’re more focused and we’re more experienced,” said senior guard Harriet Winchester.

With nearly its entire team back from last season, 1A’s No. 1 Keith Bears (26-2) are poised to win back-to-back state championships when they begin their postseason run Wednesday at 5 p.m. against the winner of Ellwood Christian and Isabella in the championship game of the class 1A, area 5 tournament.

Almost the entire roster has the experience of winning a state championship, so the players feel more ready and more focused. But with the experience comes the pressure of repeating.

Keith head coach Cecil Williams said he feels the pressure more than his players do.

“There’s more pressure than last year because last year we were trying, and now that we accomplished it I know there’s going to be pressure because that’s what the people are expecting,” Williams said. “The girls are focused. They don’t feel too much pressure, but I kind of know it’s there.”

The girls are focused on winning another state championship, but they’re also focused on pushing the boys to hoist a trophy at the end of the season.

The boys finished the season at 21-6 and at No. 3 in class 1A in the Alabama Sports Writers Association poll. After an early exit in last season’s postseason, Keith boys head coach Tommy Tisdale said his team has been motivated to achieve what the girls accomplished last season.

“The girls have probably been the biggest inspiration to our team,” Tisdale said. “Our girls and boys programs here have never been separate.”

While players and coaches claim to look only at the game ahead of them and no further, senior forward Zykia Pettway admits the potential of two state championships in Orrville comes up in discussion quite often.

“We want to bring it together,” Pettway said. “We talk about it all the time in class. We talk about what it would feel like for both boys and girls to bring the championship back.”

Williams is confident his team will have the right mentality going into this year’s tournament. As the reigning state champions, the Keith girls will likely have a target on their back.

Still, Williams said his message to his players going into this year’s postseason is no different than any other game.

“Same as always,” Williams said. “Stay focused. Stay humble. Stay hungry. Just work for what you want. You’re not entitled to anything. Everything, you’ve got to work for it.”

“I think Keith High School 1A players are the players that are going to win the 1A state championship,” Winchester said.

Local coaches discuss how, if recruiting is growing in Selma