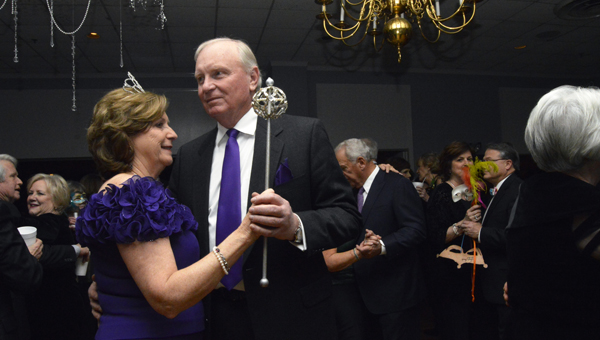 Gladys Elliott dances with her husband, Jimmy, after being crowned Pandora for 2016.

By Emily Enfinger | The Associated Press

“Pandora invites you to come join the happy parade, we are going to a Venetian Carnival Masquerade…” read this year’s invitation for the annual Pandora dance.

The night kicked off at 7 p.m. with social hour and live music in the ballroom. Drinks and hors d’oeuvres were served on a long table in the middle of the ballroom. The table was decorated with tall flower arrangements and lit candelabras, crystals and beads hung from the ceiling.

“We just enjoy it and have fun,” said Tracey Cothran, Pandora of 2015.

The social club was established in the early 1950s, consisting of no more than 100 members at one time, and has been a strong tradition ever since.

At 8 p.m. the rotation of officers was announced before crowing the new Pandora. The officers lined up on stage, decorated as a gondola and covered in tulle and lights.

A new Pandora is elected every year, which acts as president until the next Pandora is chosen. Gladys Elliott was elected as this year’s Pandora.

“It’s a really big honor,” Elliott said. “My mother was a charter member, and it’s just something I heard about all my life.”

The dance alternates between a costume dance and a formal dance each year. As incoming Pandora, Elliott picked the theme of a masquerade ball for the formal or semi-formal dance.

“You try to do something that hasn’t been done before,” Cothran said.

Just after 8:30 p.m., tables were cleared out of the ballroom to make room for around 100 guests in attendance to dance. Elliott said though the dance is fun, she believes the preparation for the dance is what makes the social club worthwhile.

“That’s really so much of the fun, is when all of the members come, for two or three days and we visit, decorate, that kind of thing,” Elliott said.

Cothran said the time spent together working is what brings comradery and fellowship to the social group.

“It’s not just a dance club,” Cothran said. “We have fun doing it.”

The number of confirmed cases of tuberculosis in Perry County continues to grow. On Friday, it was released that two... read more