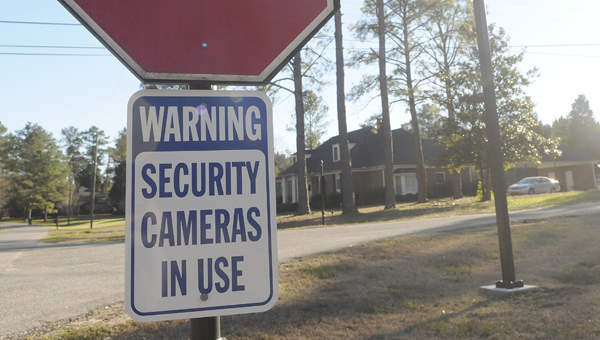 Security cameras have been installed in the Lansdowne community.

The Lansdowne community has invested in security cameras to combat a rash of car break-ins throughout the neighborhood.

Over the last year, there have been five car thefts in Lansdowne and multiple other incidents, according to Harold Speir, who lives in the area and is actively involved in the Lansdowne Homeowners Association.

“Anything that’s unlocked they would just come in,” Speir said. “[We had] several cars with their windows broken out of. As far as I know, there have been no arrests yet.”

The hope around the neighborhood is that the new cameras will help combat that problem or at least help police catch the lawbreakers responsible.

Speir said three cameras were installed around Thanksgiving by Selcom. One of the cameras has a fixed lens, while the other two pan, tilt and zoom. The latter two track movement and put a focus on identifying vehicle tags.

“They act as a deterrent,” said Selcom general manager Rick Williams. “They are designed for forensics evidence to identify vehicles. If there is a suspicious vehicle moving around the neighborhood, it helps to identify that vehicle and prove it was in the neighborhood when a witness says it was there.”

The cameras are equipped with light-finding technology so they are effective in darkness and can even provide color pictures at night.

Selma City Councilwoman Susan Keith, whose ward oversees Lansdowne, said she put $10,000 from oil lease funding toward the cameras. The homeowners association provided most of the remaining funding for the cameras.

“It has helped restore a sense of calmness and security in the residents,” Keith said.

The Lansdowne community has also added several signs that warn that security cameras are in use in the area. The signs are blue, easy to spot and are placed below stop signs throughout the subdivision.

One camera is positioned at the main entrance off of Marion Junction Road.

One of the tilt and zoom cameras is positioned at a four way stop where Keith Way and West Chambliss Drive meet.

The other camera is at the intersection of West Chambliss Drive and Pecan Drive.