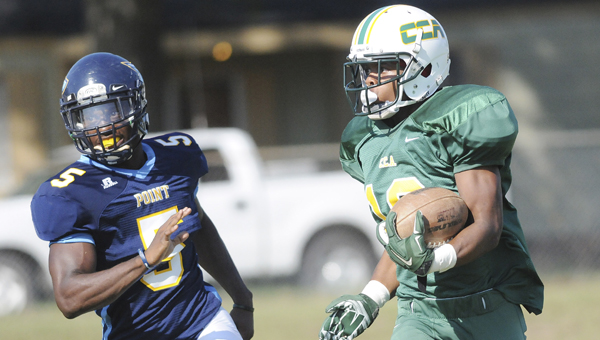 Concordia College Alabama’s Justin Powe runs with the ball during an Oct. 12 junior varsity football game against Point University. The game marked the first time the Hornets had played a football game on their on-campus field. The university’s board of regents voted last week to end the school’s football program.

The decision was made during the university’s board of regents meeting Thursday and was announced Tuesday.

The roughly 80 scholarship football players have a chance to finish out their college career on scholarship as long as they maintain the minimum required GPA of 2.0.

Concordia chief financial officer Dexter Jackson said the decision was not based on the team’s performance this past season. Jackson said coming to the final decision wasn’t easy, but it was something the school felt it needed to do.

With such a large roster, Concordia director of public relations Abby Campbell said that the price of travel, equipment and other expenses became too much of a financial stress on the college.

Head football coach Stanley Conner said he wasn’t happy to hear the news, but he is grateful of his time spent coaching the Hornets.

“Being that we are a tuition-driven college, I thought the program was doing what it’s supposed to do and so it’s just kind of unfortunate that it happened, but whatever is for the betterment of the college is what I’m about,” Conner said.

While the players won’t be playing football for Concordia anymore, Conner has no doubt his players will experience continued academic success throughout the remainder of their college careers.

“When you see them 10 to 15 years from now, and they remember the stories that you told them and how they feel, applying it to their life, that’s the joy of being a coach,” Conner said.

Jackson is hopeful that the football coaches will continue to stay on staff at Concordia helping students learn and grow in other areas. Conner said he is hopeful he will still be at Concordia in the future.

“We’re actually working to see if we can have coaches assigned to different positions on campus. If that’s not a possibility, some coaches will be paid out according to their contract,” Jackson said.

While Conner was disappointed with the outcome, he is looking forward to his players continue to achieve their academic goals.

“I was fortunate enough to be there when kids graduated,” Conner said. “That’s what it’s all about.”