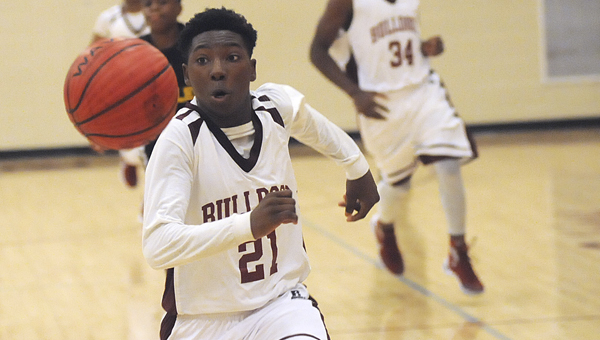 R.B. Hudson’s Marqwavis Davis chases down a loose ball before taking it to the hoop for an open layup to put the Bulldogs ahead 38-30 in a home game against Ellwood. –Justin Fedich

Earlier in the season, R.B. Hudson lost to Ellwood Christian at Ellwood. Bulldogs head coach Derrick Randolph didn’t forget about that game, and his team used that loss as fuel to flip the script at R.B. Hudson.

The R.B. Hudson Bulldogs (11-2) fought off a fourth quarter comeback bid from the Ellwood Christian Eagles (6-2) in a 59-49 home victory Thursday. Ellwood’s Joseph Mahone led all scorers with 21 points, but it was a more balanced effort from R.B. Hudson that got the job done.

“We just wanted to come out here and show that we can actually play with those guys,” Randolph said.

Ellwood led 6-4 early on, but two consecutive 3-pointers from Marqwavis Davis put R.B. Hudson in front 13-6. Ellwood fought back, but Tyreshon Freeman hit a layup at the end of the first quarter to keep a 15-11 lead.

Mahone opened the third quarter with a layup as he hit the ground to narrow the deficit to 15-13. R.B. Hudson only led 21-19 when T’Darrious Olds hit a layup while getting fouled to give his team a four-point lead.

Ellwood came back in the fourth quarter. With just over three minutes left in the game, Justin Buford blocked a shot and it led to a Derrick Edwards Jr. layup on the other end to tie the game. The visiting crowd started echoing through the gym, “Let’s go Ellwood!”

“We tied the game up right there in the fourth quarter,” said Ellwood head coach Derrick Edwards. “Momentum was on our side.”

“He stepped us for us tremendously,” Randolph said of Bradley. “After our top players fouled out, he really stepped up and made critical decisions and critical plays and made the free throws toward the end.”

With 1:30 left, Harris circled around the defense for a layup to put the game away. Despite dropping its second game of the season, Edwards was proud that his team never gave up.

“They keep their head up and they play 100 percent the whole way so that’s what I’m most encouraged about with my team is that they’re not quitters,” Edwards said. “They’re tough kids.”

For R.B. Hudson, the win over Ellwood was a confidence builder as both teams move into the final stretch of the season.