Center opens with focus on nonviolence 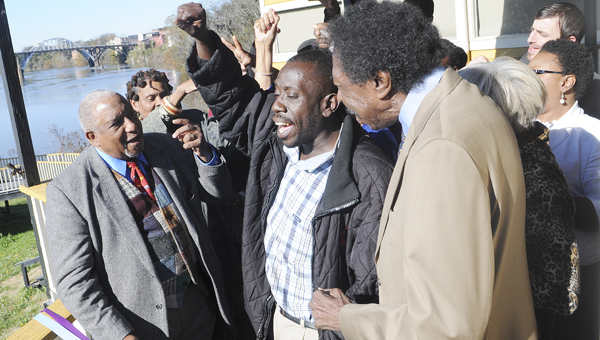 Bernard Lafayette, Melvin Barnes Sr. and Bruce Boynton prepare to cut the ribbon for the Selma Center for Nonviolence, Truth and Reconciliation. The center will teach nonviolence and conflict resolution.

On the same night NAACP field secretary Medgar Evers was shot and killed in Jackson, Miss., Bernard Lafayette Jr. was attacked in Selma.

Lafayette, a founding member of the Student Nonviolent Coordinating Committee, had been working in Dallas County since 1962 to register black voters.

On the evening of June 12, 1963, he was attacked near the intersection of First Avenue and Union Street after leaving a mass meeting at Tabernacle Baptist Church.

It’s a story Lafayette retold during Friday’s opening of the Selma Center for Nonviolence, Truth and Reconciliation.

Lafayette said he survived that night because of his non-violent reaction to the attack. Every time he was hit, he got back up off the ground but never returned punches.

“People attack you expecting you to physically resist, but what you do is resist that expectation,” Lafayette said.

He did call for his housemate, Red, to come outside after the man took out a gun.

“I wanted someone to witness this homicide, this assassination,” Lafayette said.

When Red did come outside, he came across the banister carrying a rifle.

“He was trying to get a beam on this guy, and I said, ‘Red, don’t shoot,’” Lafayette said.

“He tried to get around me, and I blocked him so he couldn’t shoot this guy that had a gun on me. It’s difficult to shoot someone in the back that’s trying to protect you.”

It’s the power of nonviolence that Lafayette and other founders of the Healing Waters Retreat Center want to stress to young people.

Friday’s ribbon cutting with Lafayette, Hank and Rose Sanders, Bruce and Betty Boynton and other board members capped a week of events and years of planning.

However, the center will not focus on the past but instead work to create a better future.

The center will use nonviolence and conflict resolution as taught by Dr. Martin Luther King Jr. as its guiding philosophy as it works to heal and transform violence at the personal, family and community level.

“We are known for being a place that people come to learn how to be nonviolent, how to change the world, but yet Selma is still in so much need. So much violence still occurs here,” said Anika Jackson, who is working as the center’s executive director.

The center is located in the old Oneal’s Restaurant building, which boarders Riverfront Park and overlooks the Edmund Pettus Bridge.

The bridge and its history loomed large over Friday’s ribbon cutting. The role nonviolence played in Bloody Sunday, the voting rights movement and the course of history.

“We look at the violence that is taking place in our country and even around the world. We realize that our job is not yet done,” LaFayette said.

“We look at Selma, and we look at the symbol of nonviolence and the change made.”

For more information about the center, contact Jackson at (334) 526-4539 or visit selmacenterfornonviolence.org.

Terri Johnson, left, shows Cheryl Till some of the the unique Christmas decorations made by people in Selma at the... read more