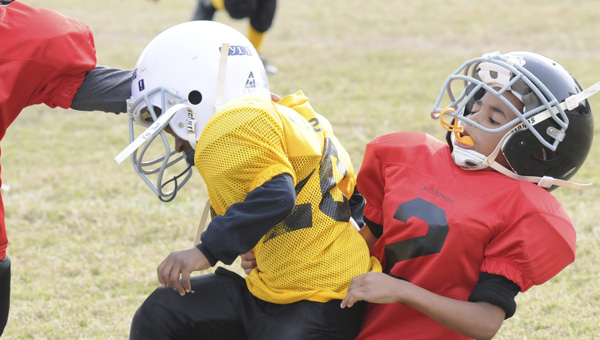 Quamarian Pernell, of the Jr. Dolphins, tackles a runner for the Jr. Bears during the Selma youth football 5- and-6-year-old championship game. The Jr. Dolphins won 12-0.

The Jr. Dolphins became the first Selma youth football team to hoist a championship trophy this season after shutting out the Jr. Bears 12-0 Saturday. Jr. Dolphins head coach J’vantae Furlow said this was the hardest game the team played all season, but like his players had done all season, they stepped up to the challenge.

Jr. Bears head coach Leon Mason said he was proud of his team’s effort, and he wasn’t disappointed at all with the loss.

“My kids played the best they played all year against a tough team, so I’m not mad at all,” Mason said. “It was a great game.”

The first quarter went scoreless. Omari Smith was determined to make sure it didn’t stay that way in the second quarter, as he took a handoff 40 yards around the right end all the way for a touchdown to take a 6-0 lead.

Furlow said he has been able to count on Smith to deliver all season.

Alexander Johnson responded for the Jr. Bears with a 25-yard run on the next play. He broke free right before the half, but was brought down short of the end zone.

“It was a very strong effort,” Mason said. “He’s a real key part to the team.”

Johnson opened the second half with another 25-yard run, bringing the ball down to the 10-yard line. Once again, the Jr. Dolphins stiffened up on defense, keeping the Jr. Bears out of the end zone.

Quamarian Pernell gave the Jr. Dolphins a 12-0 lead when he ran in for a 12-yard score in the fourth quarter. Furlow said Pernell’s passion for football has grown as the season has gone along.

“At first he wasn’t feeling it, but now he loves it. He loves it a little too much,” Furlow said with a laugh.

Both teams consisted of many players playing football for the first time. Each coach said their players learned valuable lessons this season that will translate to their future football seasons as well as life lessons they can take with them off the field.

“If you put in hard work, then it will show,” Furlow said.

The Bobcats struck first, but the 49ers sealed the deal in an 8-6 victory thanks to a third quarter touchdown by Ghron Furlow. The Bobcats’ Deundra Connor ran for an 11-yard touchdown in the second quarter to take a 6-0 lead. Furlow returned the favor in the third quarter, with an 11-yard touchdown. The difference in the game was Furlow’s two-point conversion following his touchdown.  The 49ers followed the win with a victory in the 11- and 12-year-old championship Monday.

Marquarius Reese ran for a 60-yard touchdown in the first quarter to push the Bears over the Raiders 6-0. The Bears followed their victory with a 16-6 win over the Dolphins Monday to win the 9- and 10-year-old youth football championship.

Jalen Prince scored the lone touchdown of the game as the Packers beat the Bengals 6-0. Prince ran a 20-yard touchdown in the second quarter to pull out the victory. The Packers ultimately fell in the 7- and 8-year-old championship to the Lions Monday.