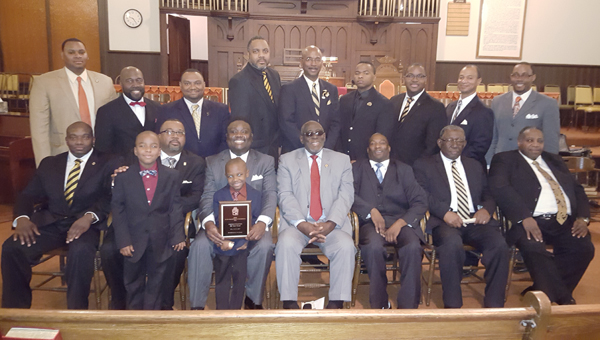 The Delta Phi Lambda Chapter of Alpha Phi Alpha Fraternity, Inc. has been named the top alumni chapter in the state.

Four years ago the Delta Phi Lambda Chapter of Alpha Phi Alpha Fraternity, Inc. was close to being extinct.

But since then the Black Belt Alphas have quadrupled in size and been named the top alumni chapter in the state.

“This was a huge honor for us to receive this award, and it felt really, really good because this has been the culmination of several hard years of work,” said Warren Billy Young, president of the Selma chapter.

“Just about four years ago we only had seven members in our chapter,” Young said.

“Since 2011, we have increased our chapter to 28 active members, and each one of them when we say active they go out and they conduct a certain number of service hours per month.”

Young said the Selma chapter competed against Alpha Phi Alpha chapters from Birmingham, Huntsville and Mobile, which have many more members than the Black Belt Alphas.

“We competed against several other chapters in Alabama,” Young said. “And the panel of judges determined that we had conducted a lot of service and a lot of positive activities for the community.”

The Black Belt Alphas were awarded the honor last Sunday in Birmingham at an award ceremony, and they will go on to compete in the regional competition in Atlanta in March to be named the Regional Alumni Chapter of the Year.

Some of the work the Black Belt Alphas have done over the least year is teach students about going to college by hosting multiple college fairs. They have also given away scholarships to students.