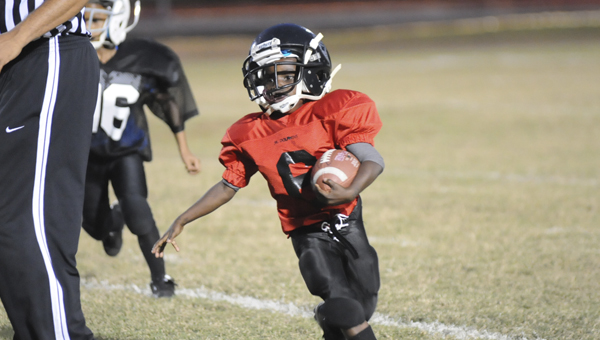 Jr. Dolphins’ Rashod Martin races toward the left end of the field looking for running room Monday at Memorial Stadium against the Jr. Raiders. The Jr. Dolphins scored three touchdowns and held the Jr. Raiders scoreless to win 20-0. Below, Omari Smith takes a handoff 26 yards for a touchdown.

The Jr. Dolphins of the 5-6 year old Selma youth football league haven’t struggled too much on their way to a 7-0 start to the season. On Monday, the Jr. Dolphins once again won a game by multiple touchdowns, a feat they are making look easy despite having a roster made up of a majority of football first-timers.

Omari Smith has been scoring touchdowns for the Jr. Dolphins all season, and Monday was no different. Smith scored twice, and the Jr. Dolphins’ defense again played its part as the Jr. Dolphins stayed undefeated on the season to beat the Jr. Raiders 20-0 at Memorial Stadium.

The Jr. Raiders got off to a strong start, forcing a Smith fumble on just the second play of the game. The Jr. Dolphins forced a three-and-out after the Jr. Raiders’ Jamarion Jones wasn’t able to find space to break open a big run.

“He’s primarily our main back so I always try to get him going if I can, but tonight we just couldn’t,” said Jr. Raiders coach Adrian McGee.

Quamarian Pernell scored the first touchdown for the Jr. Dolphins in the first quarter, running right end for 22 yards. Smith got the handoff for the two-point conversion and bounced off defenders as he weaved his way into the end zone.

The Jr. Dolphins led 8-0 at the end of the first quarter.

The Jr. Dolphins quickly got the ball back after the Jr. Raiders’ next possession stalled. Smith ran around the left end, juking tacklers for a 26-yard touchdown to give the Jr. Dolphins a 14-0 lead at halftime.

“They’re defense is vicious,” McGee said. “That’s the heart and soul of their team.”

Jones had a few big runs to open the second half, but the Jr. Dolphins ultimately forced the Jr. Raiders to turn the ball over on downs. Smith put an exclamation point on the game with a 30-yard rushing touchdown in the fourth quarter.

Despite the loss, McGee saw improvement in his young team.

“We played good,” McGee said. “They fought until the end of that game.”

Both teams are comprised of a majority of players who are new to the game of football. Furlow said he believes his team is learning more and more of the fundamentals of the game each week.

“Now, they’re getting the concept of football, so they understand the game now,” Furlow said.

The Jr. Dolphins end their regular season against the Jr. Bears Saturday as they aim for an undefeated record. The Jr. Raiders play the Jr. Cowboys Saturday.

Jalen Prince scored on touchdowns of 11 and 34 yards to give the Packers a 14-6 edge over the Lions. Prince scored his first touchdown in the first quarter and JoDarius Hamilton added the two-point conversion to give the Packers an 8-0 lead. Derick Smith gave the Lions their lone touchdown of the game in the second quarter on an 85-yard run. Prince added a 34-yard touchdown in the fourth quarter.

The 49ers got on the board early and their defense helped out as they shutout the Jets 8-0. Kendarrious Watts scored an 8-yard touchdown in the first quarter for the 49ers and added the two-point conversion.