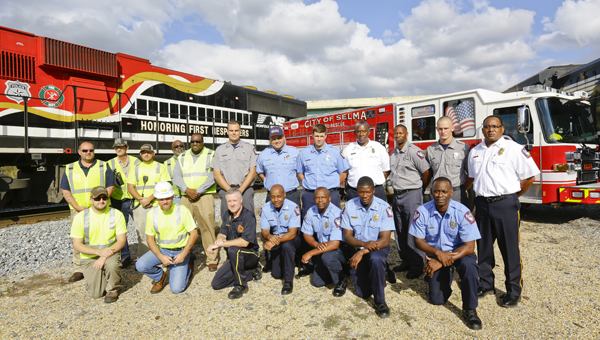 Norfolk Southern’s 9/11 remembrance engine made a stop Wednesday in Selma.

Members of the Selma Fire Department had the opportunity to take a picture with Norfolk Southern Railway’s 9/11 remembrance engine.

“Norfolk Southern has a locomotive painted to honor America’s first responders, police, fire and EMS,” said Selma Assistant Chief Mark Walker. “It’s the only one painted this way, and luckily it came through Selma for just today.”

The fire department took a few minutes to bring a couple of trucks to place beside the engine and take some pictures to remember the occasion.

“It stays more up in the Virginia, North Carolina area, so this is the first time that it’s ventured down to Selma, Alabama,” Walker said.

Walker said he loves trains and often takes pictures of engines that make their way through Selma, but this one was very special.

“I’m a train fanatic anyways,” Walker said. “I was real proud and lucky that they were able to help us out with this photo opportunity for us. Honoring first responders, I think it’s a big thing to recognize.

Norfolk is headquartered in Virginia, but has a Selma location where Anthony Craig is the yardmaster.

“We are very excited [to have the engine here],” Craig said. “This is the first time that the first responder engine has been around.”