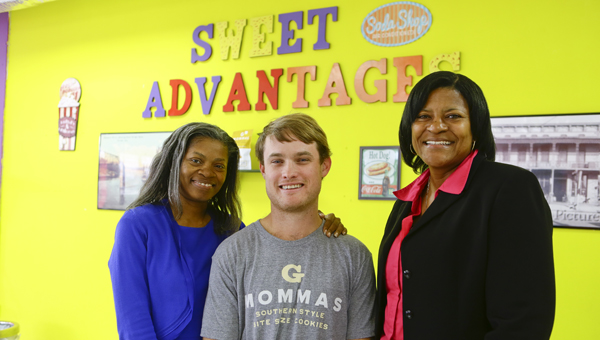 In less than a week, G Mommas Cookies owner Robert Armstrong will find out if his company won a free Super Bowl commercial.

For the past two months, people across the country have been voting in the Small Business Big Game competition by Intuit QuickBooks.

To help spread the word about the last week of voting, Selma City Councilwoman Angela Benjamin sponsored a cookies and cream social Monday at Sweet Advantages.

“I have this thing about support local, support Selma,” Benjamin said. “Selma has lots of friends. We may be 20,000 something people, but we have lots of friends in other places.”

Sweet Advantages recently moved down a couple of buildings on Broad Street — Monday’s event also served as their grand reopening.

“We wanted to promote G Mommas Cookies, so we thought cookies and cream,” said storeowner Towanda Friday. “Ice cream and cookies go good together. They are good cookies, and Robert is a good guy.”

In addition to their favorite flavor of ice cream, those who came out also had their treat topped off with cookies from G Mommas.

“What better way to promote both businesses than to have ice cream served with cookies on it,” Armstrong said.

Since being in the Super Bowl competition, Armstrong said his business has picked up. He knows the growth will be exponential should he get the spot.

This year’s game between the New England Patriots and Seattle Seahawks averaged 114.4 million viewers, making it the most watched broadcast in U.S. history.

“I’ve gotten a lot of PR just regionally and state-wide just because of the competition,” Armstrong said.

“It’s just such a big opportunity, people have really grabbed on to what this would mean for my business and what kind of big deal it is. From that I’ve really seen a sales pickup. It’s been crazy.”

Armstrong will be flown out to California to find out the winner of the competition on Nov. 3, and said that’s when his nerves will hit.

“It really probably hasn’t hit me yet,” Armstrong said. “When I get to California, I’m going to be a nervous wreck, because if I get it — it will change my life.”

To vote for G Mommas Cookies until Nov. 3, visit smallbusinessbiggame.com.