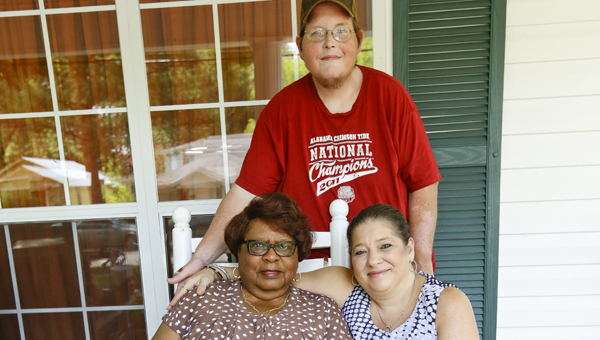 Lula Hatcher, owner of Lannie’s Barbecue, Stacy Banks and Trea Newsome pose for a photo outside of Hatcher’s home Tuesday shortly after it was announced that Lannie’s won the Alabama Barbecue Battle competition.

Lula Hatcher was smiling from one ear to the other Tuesday afternoon as she sat on her front porch across the street from Lannie’s watching customers celebrate as they walked in and out of the restaurant.

Hatcher was smiling because Lannie’s was named one of the five victors in the first ever Alabama Barbecue Battle.

“It is just wonderful. If my arms were long enough, I would just grab everybody and hug them,” Hatcher said Tuesday after finding out the Selma staple won the competition legend’s division.

The restaurant, which is named after Hatcher’s mother Lannie, has been in business for more than 70 years.

“We’ve been here for a long time. We’ve had hard times coming up through the years, but the lord has been good to us,” Hatcher said. “He kept us in business for all of this time. A lot of places went out of business … but we still kept coming on.”

When the news broke that Lannie’s won the competition, Hatcher said she was overcome with joy and thankful for each and every one of the 247,347 votes the restaurant got in the 30-day competition.

For much of the month of August, Lannie’s traded first place back and forth with Big Bob’s, but support from more than 20,000 people that were members of a Facebook group dedicated to voting for Lannie’s helped it pull off the win.

Trea Newsome created the group and with help from Stacy Banks and others, they garnered a lot of support for Lannie’s.

”We’re ecstatic,” Banks said. “It was a nail biter. We were getting three hours of sleep at night just trying to keep on keeping everybody [voting]. ”

Hatcher said voting parties held over the last few days at The Coffee Shop, Lannie’s and the Larry D. Striplin Performing Arts Center also helped Lannie’s get so many votes.

Selma Mayor George Evans, who sponsored one of the voting parties, said the competition united the community.

“I am pleased and overwhelmed by how our city and our city’s friends came together in support of a local ‘Legendary’ institution,” Evans posted on Facebook Tuesday evening. “We have proved Selma, Alabama is a force to be reckoned with. I truly appreciate each and every person that invested their time and prayers in this endeavor.”

The competition was held as part of the Alabama Tourism Department’s Year of Alabama BBQ. A documentary is set to debut on television Saturday at 6 p.m. on Alabama Public Television.