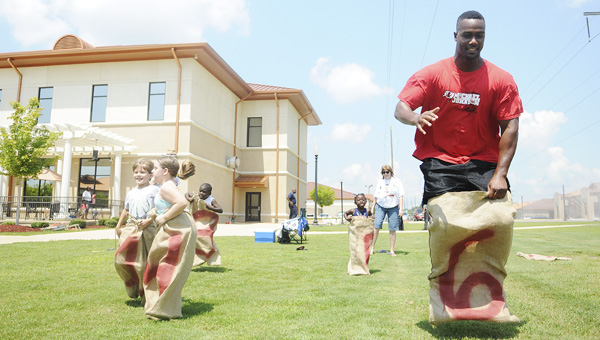 Johnson seemed to be having as much fun as anyone.

The Selma native and Cincinnati Bengals defensive end was all smiles during the kickball game, which he played in and also served as his team’s first base coach. Although he showed he probably won’t be kicking field goals in the NFL any time soon, it was clear he was having a good time on a day focused around giving back to his hometown.

“It takes teamwork to make a dream work,” Johnson said. “It is living proof every time we have something we do the entire community is always so supportive. None of this could happen if it wasn’t like this. I’m just thankful to have the support and the supporters. They really make all this stuff go.”

The event was run by Johnson’s MJ90-93 Foundation and was the fourth annual Fun Fest he’d held in Selma. The admission cost was a canned food item, which will be donated to the Selma Area Food Bank.

With less than two weeks before Bengals training camp opens July 31, Johnson was spending one of his final weekends in his hometown before football season gets underway.

“It’s great being back home around everybody,” Johnson said. “God has blessed me so much throughout my life that it’s good to sit still sometime and just look around and be thankful for where you come from, thankful for the people that I have in my life that have helped out along the way and are still continuing to help me.”

Due to Saturday’s high temperatures, which were expected to threaten triple digits, organizers created plenty of ways for participants to cool down. Volunteers and members of the Selma Fire Department helped set up games outside, which included a large sprinkler and water balloons.

However, as it got hotter outside, WCCS allowed a portion of the Fun Fest to be moved to the school’s gymnasium, where everyone could stay cool and larger games could still be played.

Although he was playing kickball Saturday, it won’t be long before Johnson puts back on a Bengals uniform and takes the field in Cincinnati again. He returned to the Bengals this offseason on a four-year deal after spending the 2014 season in Tampa Bay.

After an injury-plagued year, he’s fired up about getting back on the football field.

“When the season ended, I said I will never have another year, let alone, season like the one that was before,” Johnson said. “I made up my mind and God has continued to bless me. I’ve put in the work, and I continue to believe that his will be the season of my life. It has been the best year of my life so far.”

The Bengals made the playoffs only once in 18 years before Johnson’s arrival in 2009. Since then, the team has made the playoffs five of the last six years, but has lost in the wildcard round each time. Johnson wasn’t a part of last year’s Bengals’ team because he was a member of the 2-14 Buccaneers, who earned the top pick in the NFL Draft after a dismal season.

He said he’s glad to be back in Cincinnati, where he spent the first five seasons of his NFL career, and he believes the Bengals have what it takes to get over the hump.

“All we need to do is win that one game and I think we are going to skyrocket. I’m thankful that I got to come back and be a part of that,” Johnson said. “I’m still chasing my first championship ever in life and I really believe I’m going to get one in Cincinnati before it’s over.”

Johnson and the Bengals will open the NFL preseason Aug. 14 against the New York Giants.