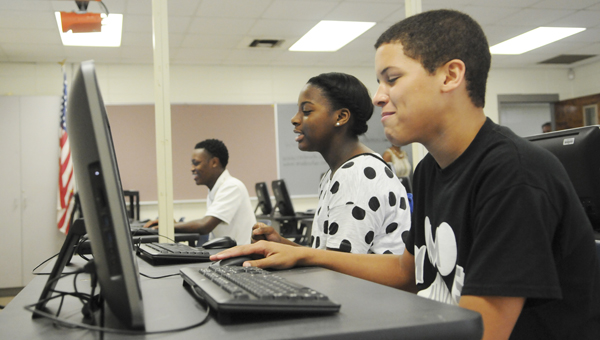 Preston McGee, Marshall McCary and Mar’Trel Chappell play on brand new computers in their seventh grade Martin Middle School computer lab. The computers and all of the equipment were donated by NFL star and Selma native Michael Johnson.

Thanks to NFL star Michael Johnson, students at Martin Middle School will be able to enjoy a computer lab full of brand new equipment this upcoming school year.

Principal Queen Morrow and Michael’s mother Thomasene Johnson were among those on hand Monday as the school unveiled the new Michael D. Johnson Technology Center, which includes 24 brand new desktop computers, a promethean board, desks and chairs and a network printer.

“This was very important because the children take S.T.A.R. reading and math tests in the library, and she only has seven or eight computers, but now we can get 24 students in at one time to do our reading and math achievement tests,” Morrow said.

Morrow said the lab’s computers were out of date and that she knew they’d have to be replaced this year.

“They still had Windows XP, which is no longer supported with virus software so our county had made the decision that all computers with XP if they couldn’t be upgraded, then they were to be taken off the Internet connection,” said Martin Middle librarian Debbie Stauffer. “That left that lab completely empty. There was nothing else in there.”

Luckily, Johnson was there to save the day.

The NFL star and former Martin Middle student had Thomasene call area schools to see where they could use assistance this year. When Johnson heard about Martin Middle’s need for a computer lab, he was more than happy to give.

“He would give you the shirt off his back,” Thomasene said. “He just feels like he needs to reach back and help the kids behind him because that’s the future and any time you can help your future that’s what you need to do.”

The lab will be used primarily for seventh grade students.

Stauffer said in the past seventh graders would’ve had to use the eighth grade lab, which took away their computer time. With the new equipment, that’ll no longer be the case.