Activists speak out against women’s clinic 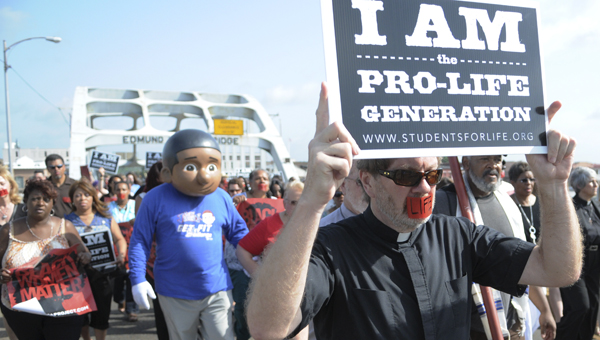 Protesters from all around the United States were in Selma Saturday to march over the Edmund Pettus Bridge and speak out against a Selma women’s clinic they say is performing unlawful abortions.–Daniel Evans

Activists from around the country marched over the historic Edmund Pettus Bridge Saturday as part of a planned protest against a Selma women’s clinic they accuse of performing unlawful abortions.

Leaders of The Selma Project said they have evidence that the Central Alabama Women’s Clinic, which is operated by Dr. Samuel Lett, performs more than nine abortions each month, which would require it to fall under state regulations as an abortion clinic.

An Alabama Department of Public Health investigation into the clinic failed to find evidence of wrongdoing, but protesters are demanding a more thorough look.

“We don’t believe the Alabama Department of Public Health actually did an investigation,” said Catherine Davis, founding core member of the National Black Pro-Life Coalition and president of The Restoration Project. “In my mind, if they had simply sat in front of his clinic when the complaint was first filed they could’ve seen for their own eyes women going in pregnant and coming out not.”

Father Terry Gensemer, national director of Charismatic Episcopal Church for Life, said there is evidence that Lett’s clinic is unlawfully performing more than the allotted number of abortions allowed each month.

“We’ve known it because people in the community that have come to us to let us know this was going on,” Gensemer said.

Brian Hale, who serves as general counsel for the ADPH, responded to an email request for comment Saturday afternoon.

Protesters believe the ADPH needs to take a deeper look. Gensemer and Davis said they gave the ADPH approximately a dozen recordings of women making an appointment to have an abortion at the clinic.

“They would schedule as many abortions as we made,” Gensemer said. “Their familiarity with just talking about abortion with the way they schedule them … that language is just too familiar.”

Alveda King, the niece of civil rights leader Martin Luther King Jr. was among those who marched across the bridge in protest Saturday. She said some have accused the protesters of using Selma for national attention after Oprah Winfrey’s movie “Selma” and President Barack Obama visited the city earlier this year. King said that couldn’t be further from the truth.

Gensemer said the group will continue to protest until something is done.

“We are going to continue to come back and have more of a local presence, and if need be, we will bring more national groups to bring attention to this place and also to the Alabama Department of Public Health,” Gensemer said. “We will possibly be visiting them and doing a protest there and just doing everything we can to ask our state officials to protect the citizens of Alabama.”

Calls to the Central Alabama Women’s Clinic to request comment from Lett were not returned.