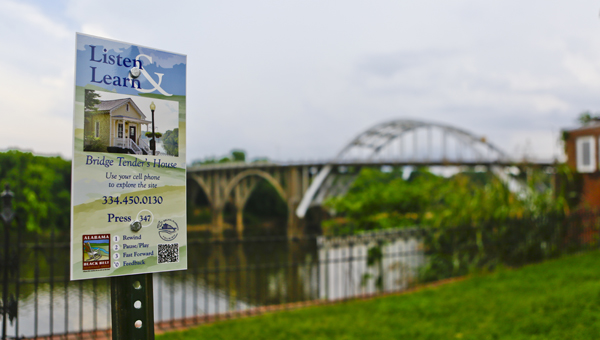 A new audio tour of Selma will be officially unveiled June 17. One of the 75 locations, includes the Bridge Tender’s House off Water Avenue.

Selma and Dallas County Tourism is putting the finishing touches on a new audio tour about sites of interest around town.

The tour features 75 points of interest and allows people to listen to information about the location using a QR code by scanning a code with a cell phone application or dialing a number.

They will use their cell phones to either scan the QR code or dial a phone number listed on the sign. The offical unveiling of the tours will be June 17.

The tours, funded by the Alabama Black Belt Heritage Area, features historic as well as architectural information on the locations. Those who listen to the tour might recognize the voices of those who know a thing or two about the site.

“Each recording is done by local citizens that have some connection to the site,” said Tourism Director Ashley Mason. “Judge (Kim) Ballard did the one for the Dallas County Courthouse. Anyone who was connected to the site we tried to get to come in and do a brief history about the site.”

Along with the Dallas County Courthouse, the Centre for Commerce, the Edmund Pettus Bridge and other locations will be highlighted on the tours.

In case individuals get lost on their audio tours of the Queen City, a map brochure will be available. The maps will direct people to different sites on the tour, and each map comes with the addresses of the featured sites.

Mason said the audio tours would be great for weekend visitors.

“Our office (Centre for Commerce) is open Monday through Friday,” she said. “If they want to learn about our building they can scan the QR code when they’re here on the weekends.”

She said she hopes people will enjoy the change to learn about the city.

“It’s kind of a new technology that’s still being integrated into projects,” Mason said. “I think it’s a great way to incorporate technology and get the younger generation more involved with the history.”