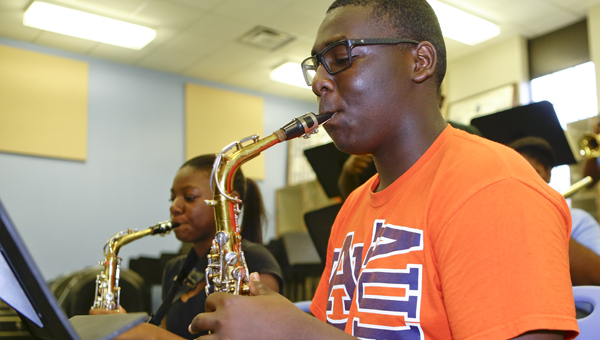 The Selma High School Jazz Band has been practicing since early March for a concert they will present in July.

The concert will include music from the 1960s through the 1990s, according to band director Brandon Williams. However, this year’s concert will focus on jazz.

Williams believes a jazz concert will give Selma “something that they don’t too often get to experience.”

“People want something different, something they’re not expecting,” Williams said.

He feels that providing something different will bring in a larger audience too.

“This concert will not only educate my students on big band jazz music, but to also show future students that playing jazz isn’t that bad,” Williams said.

Unlike concerts that have been hosted in the past with guest performers, the students of the jazz band will be the stars this time.

“We get to showcase what we do in the band,” said Zarria Howard, a junior saxophone player. “Usually, it’s just guest, but this year we get a chance to shine. Now, they can see what else we can do.”

Along with a performance from the Selma High School Jazz Band, guests will hear singers and other live music.

“I think that everyone who comes out will enjoy the concert. If they haven’t seen one of our programs, they’re missing a treat, but should know . . . that the best is yet to come,” Williams said.

Tickets are priced at $15. A full dinner will be served.

Tickets are currently on sale and can be purchased directly from the Selma High School front office or band room.