Unity in the Community a big hit 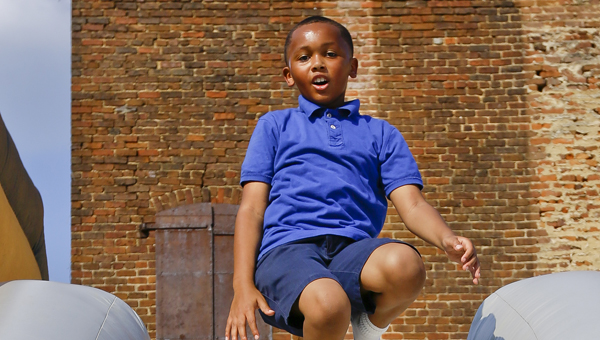 Caydon Brown plays on the slide and bouncing house during the Unity in the Community event Saturday in Phoenix Park. –Alaina Denean Deshazo

Saturday’s fourth annual Unity in the Community Praise and Worship was all about bringing the community together, and it did just that.

A few hundred people showed up to Phoenix Park on Water Avenue to take part in the festival, which aims to bring people together through gospel music, food and drawings to pay utility bills.

“Every time they have one I try to come because it is some place for the kids to go, and it is nice,” said Veronica Willis, who brought her grandkids. “It is like a gathering for something good, something positive.”

The event started four years ago when Selma City Council President Corey Bowie and Ward 5 Councilman Samuel Randolph put their ideas together and turned them into one big event for the community.

“It was just a coming together. People just want to unify more in Selma now, and this is a starting point, in my opinion, of what Selma is going to look like,” Bowie said. “This truly exemplifies what Selma is made up of. It is a melting pot.”

Since its inception, Unity in the Community just keeps on growing and attracting members of the community to join the fun.

“It keeps getting bigger and bigger each year, and it is just an honor to be able to give back to the city,” Randolph said. “It is great for us to come together on this day to celebrate peace, love and happiness.”

The event, which features food from different nationalities, along with praise and worship, also gives back by paying some lucky community members’ utility bills.

Valerie Wagner, who came to Unity in the Community, was the first to have her utility bill paid, and it came as a complete shock.

“I wasn’t coming because I’m usually not an outdoors kind of person, and I came and put my name in the drawing,” Wagner said. “After I walked in they called my name, and I screamed. You would have thought I won a million dollars.”

While Wagner didn’t win $1 million, it definitely meant a lot to know that she didn’t have to worry about paying her utility bill this month.

“It means a lot to me. I think a lot of Selma is still divided, and this brings everybody together. It unifies us, and I think it is great,” Wagner said with a wide smile on her face. “It was my first time coming, but I’ll be back next time. If there was one tomorrow, I’d be back again.”

The event also gave back to Visually Impaired People Inc., which raises awareness for people in Selma and Dallas County with visual impairments.