A 58-year-old Selma woman was arrested Friday afternoon for allegedly scamming a bank on Broad Street for $3,900.

Sylvia Hughes Goodson was charged with first-degree theft of property by deception, and two counts of negotiating with a worthless negotiable instrument.

According to Muhannad, Goodson used personal checks to scam the bank. 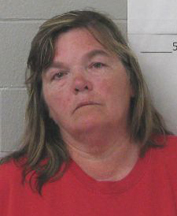 “The Fraudulent Crime Unit investigation into the theft uncovered that Mrs. Goodson scammed the bank by writing personal checks to her husband from an account that she holds at another banking institution,” Muhannad said.

Goodson’s husband, who she was writing the checks to, was not involved in the scam, according to Muhannad.

“[She] deposited those checks into the ATM of her other account at another banking institution, which allowed access to an immediate balance when the checks were deposited.”

According to Muhannad, Goodson is being held in the Dallas County Jail on a $42,000 bond.

If convicted, Goodson could face up to 20 years in prison for the theft charge, which is a Class B felony, and up to $30,000 in fines. The punishment for the negotiating with a worthless negotiable instrument is up to one year in imprisonment and up to $6,000 in fines.