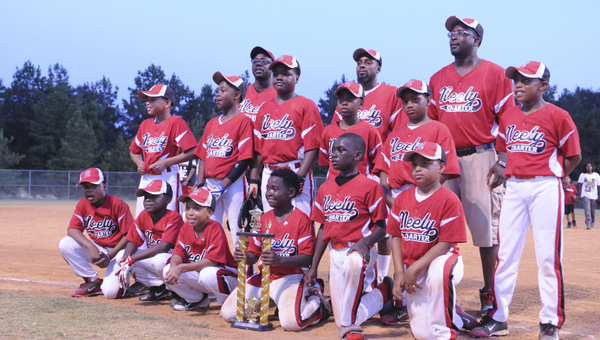 Neely Charter players pose with the 9-and 10-year-old championship trophy Friday night after their 13-2 win over Robinson’s Legal Eagles at the Dallas County Sportsplex. –Derek Thompson

“The last time we played (Robinson’s Legal) they came back and beat us in the last inning,” said Neely Charter head coach James Spears. “When we got to the third inning all these kids were kind of tired, but they hung in there and they played good and held on to the lead instead of giving up. Instead of giving up big plays they got outs when we needed to get outs.”

Neely Charter got its bats swinging early in the ballgame.

Aaron Strong got Neely Charter on the board in the first inning with a two-run homerun to start things off. It started to go downhill for Robinson’s Legal when its starting pitcher JaMichael Goings walked the bases loaded.

Strong scored off a wild pitch, Tommy Tisdale hit a sacrifice groundout that plated Quinderious Chambers and Sharod Martin came home on another wild pitch to put Neely Charter up 5-0 at the end of the first.

Neely Charter tacked on four more runs in the bottom of the second. Two of them were off wild pitches and Jason Rogers slammed a shot to center field for a two-run homerun.

Neely Charter was up 9-0 in the top of the third after recording only two hits in the first two innings. Anthony Hatcher finally got Robinson’s Legal on the board when he scored off a wild throw to third base.

“I’m proud of these kids,” said Robinson‘s Legal Eagles coach Darrio Melton. “They hung in there in the beginning. They thought these kids were actually going to be struggling, but to finish the way they finished was a great job. Their integrity and sportsmanship throughout the year is what I am most proud of.”

After a pitching change for Neely Charter, Joshua Palmer got a Robinson’s batter to groundout and stopped any further runs from crossing the plate.

Neely Charter added another run on a wild throw to first in the third inning.

Robinson’s Legal picked up another run in the top of the fourth after Neely Charter’s catcher stuck his glove out too far on a pitch and interfered with the batters swing. The play resulted in Neely Charter’s runner that was on third base getting to score.

Strong came through for the winning team once again in the final minutes. Strong capped the ballgame off with a two-run homerun to complete victory.